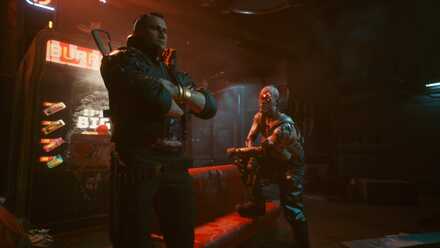 This is a walkthrough for The Pickup, a Main Quest in Cyberpunk 2077. Read on to learn all the available choices in The Pickup, how to get the best possible result, tips and strategies for the Quest, and all available rewards.

How to Unlock The Pickup

In this guide, we get the chip from Meredith, give them the bugged chip, rescue Brick, and fight our way out of the factory.

You can choose to meet with the Militech agent, Meredith Stout, before visiting Maelstrom. This will have effects on the possible routes you can take during your interactions with Maelstrom.

Regardless of what you say during the following conversation with Royce, you'll end up having to fight with Maelstrom, unless you hacked the datashard from Meredith Stout in advance.

Option 2: Give the Hacked Shard from Meredith Stout

If you hacked the Datashard from Meredith Stout, you'll be able to make a deal with the Maelstromers. This will lead you to deal with Militech soldiers instead of Maelstromers for the remainder of the Quest.

This list contains only rare Items and those which have a high chance of appearing.

The Pickup Choices and Best Choice

Choose To Get The Chip

Talking with Meredith Stout will give you the eddies to strike a deal with the Maelstrom gang. Check the The Chip section to know what will happen.

Do Not Get The Chip

This will make things simpler. Since it is unlikely that you have 10,000 eddies with you, the mission will almost always be a gun fight against Maelstromers.

At the beginning of the meeting with Maelstrom, you will have the option to calm Jackie down as Maelstromers are forcing him to do so. Calming him down will allow you to make a deal with the Maelstromers.

Choosing not to calm Jackie will instantly bring you into a fight with the Maelstromers. This will end up having to fight Royce in a mech in the final room.

Wipe the Malware From the Chip

In this situation, you can choose to pay off Malestrom instead of fighting them or stealing the bot. You will instead have to escape All Foods while being attacked by Militech soldiers.

And in the end, you will find out from Anthony Gilchrist that Meredith Stout is dead and he sent the Militech soldiers.

Don't Wipe the Malware From the Chip

Not wiping the malware from the chip will put you in a similar situation, however you will have to fight Royce in a mech in the final room.

Make A Deal With Royce

You can opt to make a new deal with Royce and you can offer the Chip to him. See the Chip section as to the effects of handing him a wiped or a non-wiped chip.

Choosing an option that seems to be taunting Royce in any way will put you in a situation with a chance to kill him. If you do, this will ensue a fight with the Maelstromers but you don't need to fight Royce in a mech.

You will find Brick, the former leader of the Maelstrom gang, imprisoned in one of rooms if you don't wipe the malware from the chip. You can choose to free him or leave him be. HIs fate will affect the future side job below.

Simply continue down the path and disregard him.

You'll have to find the computer that contains the code to his door, which is 9691, and then you'll need a Tech of 7 to disarm the mine pointing him. Freeing him will indebt him to you and will pay dividends when you meet him in the Side Job Second Conflict.

There is an internal power struggle within Militech between Meredith Stout and Anthony Gilchrist. The choices you make affect who comes out the victor. This will affect you later on as the victor will contact you and give you rewards.

For Meredith Stout to win, any one of these conditions must be met:

For Anthony to win, any one of these conditions must be met:

If your Lifepath is the Nomad and Corpo, doing the optional meet with Meredith Stout will open up unique dialogue options, however they don't amount to anything.

If you get into the firefight with the Maelstromers and choose to fight, grenades deal plenty of damage to multiple targets

At the end of the mission, when you exit the building, you'll find that corpos surrounding the building. If Jackie is not outside with you and remains in the building, one of the corpos will block your way from accessing him, rendering the Talk to Jackie objective undoable. 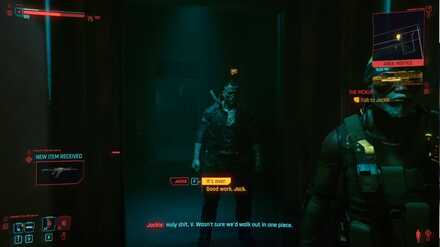 A possible way to circumvent this is by not rushing out to talk to whoever is outside, waiting for Jackie to follow you. If he's in the doorway and is stuck there, it's possible to talk to him at a certain angle.

How to Defeat Royce

Royce's mech has an intelligent shield that negates damage when hit. One of the ways to disable it is to destroy the battery at the back of his suit by shooting at it or using grenades. Alternatively, you can sneak up to him and disable the battery with a takedown.

When Royce is reloading his weapon, it will be the ideal time to get in as close as possible and shoot his battery, or his head for damage.

Using charged shots from Tech Weapons will allow you to shoot through his shield.

The perk Bladerunner increases your damage against mechanical enemies, like Royce.

There are three types of quickhacks that are effective against Royce.

1.5*: Only available in the Secret Ending

Register as a member and get all the information you want. (It's free!)
Login
Opinions about an article or post go here.
Opinions about an article or post
We at Game8 thank you for your support.
In order for us to make the best articles possible, share your corrections, opinions, and thoughts about "The Pickup Quest Walkthrough and Rewards" with us!
When reporting a problem, please be as specific as possible in providing details such as what conditions the problem occurred under and what kind of effects it had.