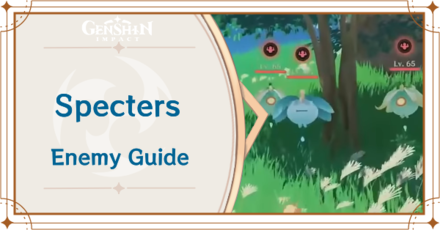 Specters are a type of Inazuman enemy in Genshin Impact Version. Learn more about the Specters' enemy information, locations, item drops, and their expedition event in this enemy guide!

All Types of Specters

New Specter Types were teased during the 2.4 Livestream and announced in a recent Inazuma Diaries update! Cryo, Pyro, and Electro Specters will appear after the Version 2.4 Update.

Note: the numbers on the map indicate how many Specters may be found in each location.

Currently, Specters can only be found on Watatsumi and Seirai Island! All Specters have the same item drops, so it won't matter which Specter type you farm.

Item Drops from All Specter Types

Kokomi, Aloy and Gorou need the Spectral items you get from Specters as their character ascension materials.

Each type of Specter shoots out an Elemental Shot as its main form of attack. Each type is also immune to its corresponding element.

The Anemo Specter collects Anemo energy and releases it in one burst with a small AoE.

The Hydro Specter spins in place, gathering Hydro energy and releasing it in a burst with a small AoE, characterized by the area on the ground rippling like water.

The Geo Specter faces the character and starts spinning, charging forward to attack.

All Specter Elements build Fury up when taking a big hit. They will get bigger and stronger the more Fury they build up, then explode violently after you defeat them. 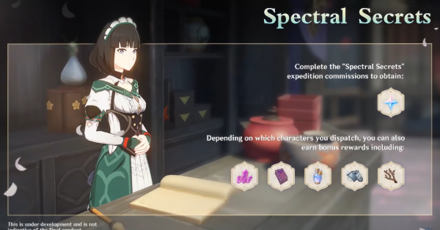 See more comments (2 Comments)
Opinions about an article or post go here.
Opinions about an article or post
We at Game8 thank you for your support.
In order for us to make the best articles possible, share your corrections, opinions, and thoughts about "Specter Locations and Item Drops" with us!
When reporting a problem, please be as specific as possible in providing details such as what conditions the problem occurred under and what kind of effects it had.