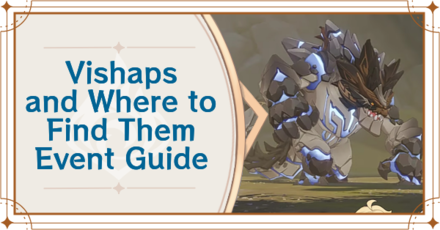 This page is about Vishaps and Where to Find Them, and event in Genshin Impact. Keep reading to find out how to unlock and participate in this event, as well as possible rewards!

Vishaps and Where to Find Them Event Period

Vishaps and Where to Find Them is an event where Travelers will go on a daily investigative expedition to find Vishaps across Liyue. Completing each expedition grants you rewards such as Primogems and Mora! 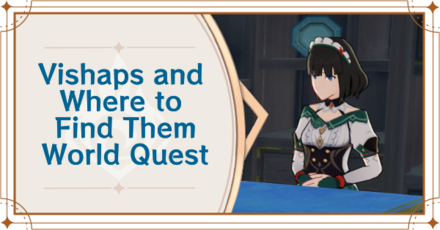 A short world quest needs to be completed before you can start participating in the event. Talk to Katheryne of the Liyue Adventurers' Guild to begin.

Vishaps and Where to Find Them Event Guide

The Liyue Adventurers' Guild has been getting a lot of reports of stronger Vishaps in the area.

Like the normal expeditions in the Adventurers' Guild, in this event you send out expedition teams to investigate areas with Vishap activity. Katheryne will provide you with 8 expeditions each day, but you can do four of these per day.

Each Vishap expedition has their own rank, along with a number of available expeditions for each one. These commissions will refresh daily. 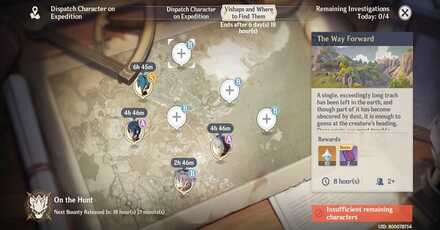 You can send 4 teams of 2 or more characters everyday on team expeditions. We recommend prioritizing the S-tier and A-tier missions to maximize the Primogem rewards!

Unlike the normal expedition, you can send more than one character to investigate. Each additional character will increase the chance to get the bonus rewards available from the expeditions. 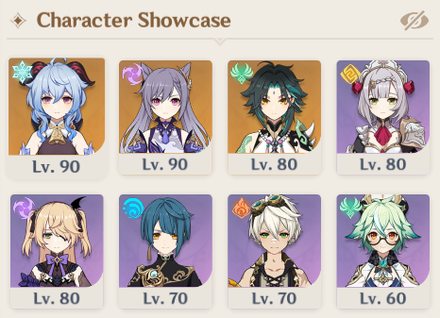 You will also be able to send a 5th character from a friend as a supporting character to increase the chance even more. Friend characters do not count towards your party count, so you still need to send at least 2 of your characters on each expedition. 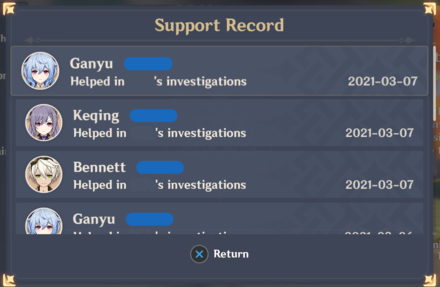 During the event, you can check which of your characters your friends have picked for their investigative parties by checking the Support Record in the Events Overview Menu.

On the Hunt Guide 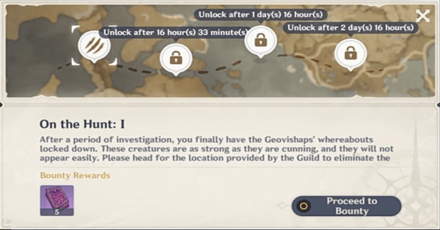 There are a total of four On the Hunt bounty challenges during this event. When taking on a bounty, a marker appears on the map that shows the location of Geovishaps. Once you've arrived at the location, you have to complete a puzzle to find the Geovishaps and defeat them.

Available at 4 AM on March 6

The On the Hunt bounty challenges are unlocked gradually as the days pass, after the day resets. Each bounty requires you to destroy stone pillars in an area. After destroying the pillars, the Geovishaps will appear, which you have to beat to complete the bounty.

On the Hunt: I Location

On the Hunt: II Location

On the Hunt: III Location

On the Hunt: IV Location

Vishaps and Where to Find Them Event Rewards

Here the the rewards that you can receive after each investigative expedition:

For each On the Hunt bounty you clear, you get five Hero's Wits. As there are 4 bounties in total, you can get a total of 20 Hero's Wits this way!

You need to do one S-rank, two A-rank, and one B-rank expedition every day to get the max amount of Primogems from this event. The event period is 8 days, and you can get a total of 60 Primogems per day.

Register as a member and get all the information you want. (It's free!)
Login
Opinions about an article or post go here.
Opinions about an article or post
We at Game8 thank you for your support.
In order for us to make the best articles possible, share your corrections, opinions, and thoughts about "Vishaps and Where to Find Them Event Guide | Vishap Expedition Event" with us!
When reporting a problem, please be as specific as possible in providing details such as what conditions the problem occurred under and what kind of effects it had.