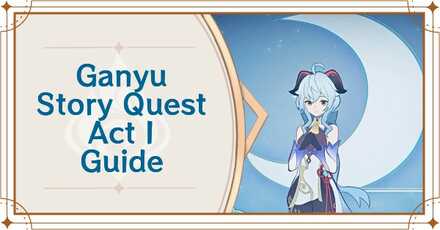 Sea of Clouds, Sea of People is a Story Quest in Genshin Impact. Learn how to unlock this Quest and where it is found, as well as its rewards and a full walkthrough for completing the Quest.

Ganyu's Story Quest will be available after the Version 1.2 is out.

Sea of Clouds, Sea of People Walkthrough and Rewards

The Illuminated Beast of the Sea of Clouds

The three secretaries who originally worked at the Jade Chamber have appeared at Yujing Terrace. It looks like something has them tearing their hair out...

The Illuminated Beast of the Sea of Clouds Objectives

A Secretary in a Sea of Humanity

Caught between the world of humans and adepti, Ganyu has descended into a funk. After she hits a snag in her plan to return to Jueyun Karst, you follow Ganyu back to Liyue Harbor, intending to resolve her misunderstanding that she has been dismissed from her post...

A Secretary in a Sea of Humanity Objectives

A Pact That Crosses Time

Accepting the commission of the Tianshu, Uncle Tian, Ganyu very naturally slips into her work mode, coming to the aid of her junior colleague Huixin with ease in the latter's time of need. To express her thanks, Huixin invites you all to Xinyue Kiosk to have a meal...

A Pact That Crosses Time Objectives

During the quest, you will have to face various enemies, including a Cryo Fatui Skirmisher and Shield Hilichurls.

Having a party with one Pyro, Hydro, and Electro will make sure you're ready for any enemy.

Register as a member and get all the information you want. (It's free!)
Login
Opinions about an article or post go here.
Opinions about an article or post
We at Game8 thank you for your support.
In order for us to make the best articles possible, share your corrections, opinions, and thoughts about "Ganyu Quest Guide | Sea of Clouds, Sea of People Story Quest Walkthrough and Rewards" with us!
When reporting a problem, please be as specific as possible in providing details such as what conditions the problem occurred under and what kind of effects it had.