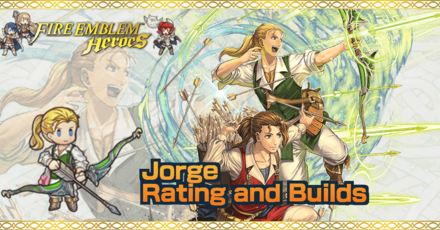 This is a ranking page for the hero Jorge - Traveling Peddler from the game Fire Emblem Heroes (FEH). Read on to learn the best IVs (Individual Values), best builds (Inherit Skill), weapon refinement, stats at Lv 40, and more for Jorge.

As a hero obtainable only through Grand Hero Battle, Jorge will always have neutral IVs by default. The only way to access IVs for this unit is through using Trait Fruits.

The best IVs for Jorge are +Atk and -HP. Jorge does not rely on follow-up attacks to deal damage so a +Atk IV is best for him. It also maximizes the 1.5x damage multiplier he has against flying units. This will improve his overall viability. His HP is of less importance so it can be safely taken as a bane.

We recommend a +Atk IV when merging Jorge to 10. With +10 merges, Jorge's Atk stat will reach 57. This is for the same reasons as above. This is a very good Atk stat for a free unit so Jorge makes for a good +10 merge candidate.

With more investment at this point, he becomes a massive threat to flying units.

Note: Jorge's stats will always have no IVs.

Jorge is a ranged physical attacker (range = 2). Therefore, when not accounting for the Weapon Triangle, the amount of damage he deals will be equivalent to his Atk minus the foe's Def stat.

The bow made by Jorge's brother, the Daniel-Made Bow accelerates special trigger and is effective against flying foes like all bows. However, its main effect is that it grants +5 Atk to allies within 2 spaces during combat and inflicts -5 Atk on foes within 2 spaces also during combat. This allows Jorge to become a support unit in some cases as his mere presence allows his allies to deal more damage at the same time decrease the firewpower of enemies.

This combines very well with Atk Opening 3 and Chill Def 3 as it can make way for a powerful physical unit like Brave Lyn to deal heavy damage to a target unit. Of course Jorge can also boost a magic unit's damage but they would not enjoy the benefits of Chill Def 3 without adaptive damage.

Casts a bonus on ally with high Atk

The C skill Atk Opening 3 is a buff skill that gives +6 to the Atk of the ally who has the highest Atk stat.This skill has good synergy with heroes that already have a high offensive ability like double attack characters such as Reinhardt and Legendary Lif, blade tomes such as Nino, and characters that have the Bonus Doubler skill such as Valentine Alm and Legendary Roy.

Jorge is one of the few blue bow units in the game and the first to be openly distributed. This allows him to fill-in specific niches other units can not. Keep in mind that he can equip inheritable bows even if they are not blue as they are not restricted to a color. This means you can inherit something like Brave Bow+ or Slaying Bow+ onto him.

Jorge has very low Spd and Res stats. This makes it easy for fast magic users to defeat him. Be mindful of Jorge's positioning in relation to magic units that can easily take him out.

We Recommend You Unlock Potential for Jorge - Traveling Peddler!

Jorge as a Source Hero 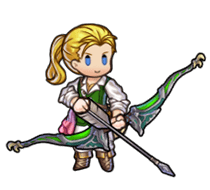 Jorge can be used to inherit the skill Atk Opening 3. However, you can only acquire Jorge from Grand Hero Battles or from using Heroic Grails, so think carefully before foddering him off.

How to Get Jorge / Illustrations / Voice Actor / Quotes

How to Get Jorge

Jorge is a Hero who, for a limited time, can be obtained through completing a Grand Hero Battle for the first time. They do not appear in regular summons. After the event has ended, they can be obtained by using Heroic Grails.

Register as a member and get all the information you want. (It's free!)
Login
Opinions about an article or post go here.
Opinions about an article or post
We at Game8 thank you for your support.
In order for us to make the best articles possible, share your corrections, opinions, and thoughts about "Jorge Builds and Best IVs" with us!
When reporting a problem, please be as specific as possible in providing details such as what conditions the problem occurred under and what kind of effects it had.