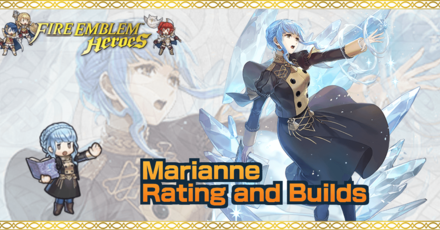 This is a ranking page for the hero Marianne - Adopted Daughter from the game Fire Emblem Heroes (FEH). Read on to learn the best IVs (Individual Values), best builds (Inherit Skill), weapon refinement, stats at Lv 40, and more for Marianne.

The best IVs for Marianne are +Atk/-Def.

Because her kit is already streamlined towards her hitting hard, having Atk as her boon will allow her greater one-shot potential.

The guaranteed follow-up attack in addition to inflicting -6 Atk/Res to her opponents means that she has no problem in defeating them in one turn of combat.

For the same reasons as above, the sheer firepower that Marianne possesses cannot be overlooked.

With these IVs, she can hit 68 Atk at +10 Merges. This is a huge amount of damage that many enemy units will have difficulty in surviving.

If you want to take advatage of her Special more, then you can also consider having +Res instead.

The biggest change here is the switch to Sturdy Impact in the A slot. This gives her the physical defense she needs and it allows her to cover her susceptibility to follow-up attacks in the player phase. Null Follow-Up 3 is picked up to protect her from guaranteed follow-up attacks.

The best go-to budget build for Marianne that makes use of her base kit and other inexpensive pieces.

Marianne is a ranged magic attacker (range = 2). Therefore, when not accounting for the Weapon Triangle, the amount of damage she deals will be equivalent to her Atk minus the foe's Res stat.

The cherry on top is the humble 5 HP heal she gets whenever she hits a foe. This allows her to run Fury 4 with less consequences! 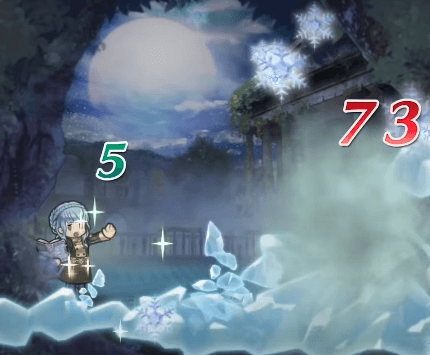 This Iceberg-loaded blow from Icy Fimbulvetr not only did lethal damage, but it also healed her for a humble amount as well.

B Duel Infantry 4 is a special skill that treats the unit’s stats as 175 in the Arena, allowing your overall score to increase when using Marianne. It is usable by any blue infantry unit, so equip it and increase your score as you would like, but keep in mind that as an A slot skill it means you will lose the ability to useful, powerful A skills like Fury 4 or Death Blow 4.

Because it is an upgrade from R Duel Infantry 3, it also gives Atk/Spd/Def/Res +2 on top of the original +5 HP.

Marianne has access to the Joint Drive Res skill. This not only improves Marianne's Res stat, but it also improves the whole team's Res! This allows your team to take on magic-based enemy lineups with more ease.

A great check against magic foes

Thanks to Icy Fimbulvetr's sustain, and all her other tools, Marianne is very durable against magic-based opponents. Thanks to Iceberg, you can further improve her Res stat to improve her damage even more when the Special activates.

Reliant on being in mixed teams

To guarantee a follow-up attack, Icy Fimbulvetr requires Marianne to be within 3 spaces of a flying or cavalry foe. Summoners will have to make sure that her team compositions caters to this condition to make the most out of her. Additionally, if those units die, she would not be able to land consistent follow-up attacks so be wary!

B Duel Infantry 4 is mainly for scoring purposes

While B Duel Infantry 4 does give some nice stats, the A skill can be home to very powerful skills that are cornerstones for great builds. If you plan to use Marianne outside of the Arena, make sure to get her an A skill that allows her to perform better in combat.

Marianne - Adopted Daughter Only Appears as a 5 Star Hero!

Marianne as a Source Hero

Marianne can be used to inherit B Duel Infantry 4 or Joint Drive Res. Iceberg and Lull Atk/Res 3 carry value too, but you are better off getting the 2 most valuable skills instead.

Take note that, B Duel Infantry 4 is rarer than Joint Drive Spd as of Feb 2021. Keep this in mind when picking a skill to fodder. However Marianne is a powerful unit since Icy Fimbulvetr is a nice skill to build around upon so please think carefully before fodderring her off.

How to Get Marianne / Illustrations / Voice Actor / Quotes

How to Get Marianne

Marianne is a Hero who can be pulled from any summon.

>>1 CONGRATS TO YA! MERLINUS TOO

Just pulled Marianne and Hilda together. I’m gassed; it was fate

Register as a member and get all the information you want. (It's free!)
Login
Opinions about an article or post go here.
Opinions about an article or post
We at Game8 thank you for your support.
In order for us to make the best articles possible, share your corrections, opinions, and thoughts about "Marianne Builds and Best IVs" with us!
When reporting a problem, please be as specific as possible in providing details such as what conditions the problem occurred under and what kind of effects it had.