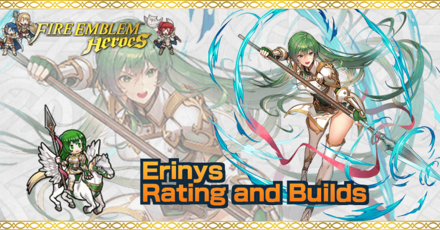 This is a ranking page for the hero Erinys - Earnest Knight from the game Fire Emblem Heroes (FEH). Read on to learn the best IVs (Individual Values), best builds (Inherit Skill), weapon refinement, stats at Lv 40, and more for Erinys.

The best IVs for Erinys are +Atk and -Def. Her weapon can guarantee her a double strike through a simple trigger condition, so even a small change in +Atk is very efficient in raising her overall damage. Taking a bane in her Def stat is ideal because it will balance her defensive stats. Taking a bane in Res will make her very susceptible to magic attacks so its not smart to take a bane in said stat.

Be warned that Def is a superbane, though! It will take -4 Def instead of the normal -3. If you can, get at least 1 merge on Erinys to eliminate any bane you have on her.

We recommend a +Atk IV when merging Erinys to 10. With +10 merges, Erinys's Atk stat will reach 64 with the weapon skill. With her ability to double strike, and potential to consistently quad-attack, she can definitely be a high-ceiling unit when it comes to offenses.

A very expensive build for Erinys that builds Atk stat so that she can consistently activate Ruptured Sky with her double strikes and Heavy Blade 3 procs. It is simple, but she can hit very hard with this skill build.

A budget skill build for Erinys that slaps a standard-issue Moonbow, Atk/Def Rein 3 and a utility Sacred Seal, Aerobatics 3. Aerobatics helps her go to her support ally to trigger her weapon skill's double strike and the rest of her skills takes care of her damage input.

Erinys's weapon cannot currently be refined. This section will be updated if it becomes refineable in the future!

Erinys is a close physical attacker (range = 1). Therefore, when not accounting for the Weapon Triangle, the amount of damage she deals will be equivalent to her Atk minus the foe's Def stat.

When Erinys is within 2 spaces of her support partner and she initiates an attack, she strikes twice similar to how Brave weapons work. Since this is an extra attack and not a follow-up attack, she can still land a follow-up attack that doubles her attacks. This results in 4 attacks if she is able to win the Spd check in the player phase. The +6 Atk/Spd bonus helps a lot in the Spd check.

53x4! 216 damage in a single combat instance for Erinys

B Duel Flying 4 is a special skill that treats the unit’s stats as 175 in the Arena, allowing your overall score to increase when using her. It is usable by any blue flying unit, so equip it and increase your score as you would like, but keep in mind that as an A slot skill it means you will lose the ability to useful, powerful A skills like Fury 4 or Atk/Spd Solo 4.

Because it is an upgrade from B Duel Flying 3, it also gives Atk/Spd/Def/Res +2 on top of the original +5 HP.

Harsh Command+ is a very powerful assist skill that not only neutralizes penalties on an ally, but it also converts them into bonuses. This skill is a tide turner in battles and especially useful in Aether Raids, where debuffs are coming not only from enemy heroes, but defensive structures as well.

Since she is not required to enter combat for the debuffs to take effect, she can be a semi-support unit of some kind especially when combined with her native Harsh Command+. Take note of this when trying to run her in an all flier team. As long as her support partner is alive to allow her to score quad-attacks, she is in a good place offensively and she does not require much support at that point to be effective.

Erinys's Res only sits at 23 at Lv.40. This makes it easy for magic users to take her out. Be mindful of Erinys's positioning in relation to magical units that can easily take her out.

While Silesse Frost does carry powerful effects, the second strike requires Erinys to be within 2 spaces of her support partner. This means that without prior planning in team building, the second strike cannot be landed. This is a huge blow to her overall viability as a unit so make sure to prepare beforehand!

B Duel Flying 4 is mainly for scoring purposes

While B Duel Flying 4 does give some nice stats, the A skill can be home to very powerful skills that are cornerstones for great builds. If you plan to use Erinys outside of the Arena, make sure to get her an A skill that allows her to perform better in combat.

As a flying unit, Erinys takes 1.5x damage from bows and weapons effective on flying units. Be sure to keep them out of the range of archers and leave them to other units.

Should you Unlock Potential for Erinys?

Erinys - Earnest Knight Only Appears as a 5 Star Hero!

Erinys as a Source Hero

How to Get Erinys / Illustrations / Voice Actor / Quotes

How to Get Erinys

Erinys is a Hero who can be pulled from any summon.

Register as a member and get all the information you want. (It's free!)
Login
Opinions about an article or post go here.
Opinions about an article or post
We at Game8 thank you for your support.
In order for us to make the best articles possible, share your corrections, opinions, and thoughts about "Erinys Builds and Best IVs" with us!
When reporting a problem, please be as specific as possible in providing details such as what conditions the problem occurred under and what kind of effects it had.