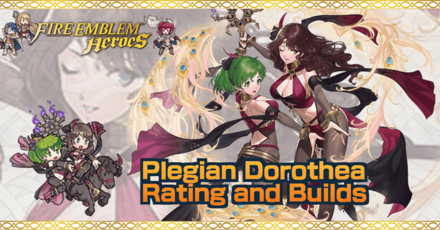 This is a ranking page for the hero Dorothea - Twilit Harmony from the game Fire Emblem Heroes (FEH). Read on to learn the best IVs (Individual Values), best builds (Inherit Skill), weapon refinement, stats at Lv 40, and more for Plegian Dorothea.

The best IVs for Plegian Dorothea are +Spd and -Def. A higher Spd stat allows Dorothea to get a ton of follow-up attacks on her foes. Additionally, her Spd is a superboon so you should take advantage of that as much as possible. Another reason why you should take a Spd boon is that her weapon effect relies on her having a high Spd stat. Her Def is of less importance as she is mainly an offensive unit so it is safe to take as a bane.

We recommend a +Atk IV when merging Plegian Dorothea to 10. At +10 Merges, Plegian Dorothea's Spd will reach such high levels that pushing it up higher is a waste. At this point, it would be better to opt with a +Atk IV instead to help her deal more damage with the follow-up attacks she scores.

This support build is both good for general support purposes and for defending your Aether Keep in Aether Raids. Guidance 3, Distant Guard 3, and Wings of Mercy 3 are intergrated into her kit for general support utility. Wings of Mercy is a great skill in Aether Raids defense because it allows Dorothea to move very erratically. It will be hard for the raiding side to predict where she will be going. Fell Candelabra, Moonbow, and Fury 4 will be enough for her to deal heavy damage. Not to mention, Fell Candelabra's ability to debuff at long ranges can allow her to function similar to Veld or Aversa.

This budget buid simply adds an Aerobatics 3 Sacred Seal and a Moonbow Special. Aerobatics will help improve Dorothea's mobility allowing her to refresh allies with more ease and Moonbow will help her deal damage in situations where refreshing an ally is not the best option.

Plegian Dorothea's weapon cannot currently be refined. This section will be updated if it becomes refineable in the future!

Plegian Dorothea is a ranged magic attacker (range = 2). Therefore, when not accounting for the Weapon Triangle, the amount of damage she deals will be equivalent to her Atk minus the foe's Res stat.

Her Harmonized Skill grants the following to the qualified allies:

Additionally, it grants another action to the ally with the highest HP who has already acted. It can affect units that have Sing/Dance, but the unit has to be from the same titles as either Dorothea or Lene.

You can read the in-game text for Plegian Dorothea's Harmonized Skill and the duel component in this section!

Possesses the ability to refresh dancers!

Refresher skills like Dance and Gentle Dream cannot refresh units that have refresher skills currently equipped. However, Dorothea's HarmonizedSkill can! This can make for some interesting strategies that you can run with Plegian Dorothea's kit. 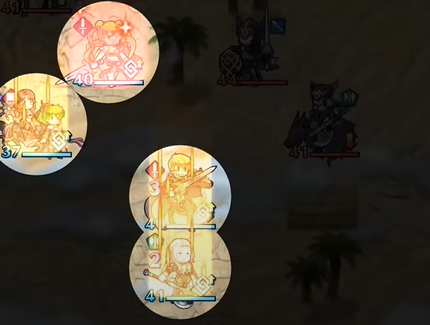 Even Silvia got refreshed!

Because of Firestorm Dance 2, not only does an ally get an additional action, but they also get +3 Atk/Spd. This provides them a bit more firepower that may mean the difference between defeating the next foe or not. This also synergizes well with blade tome users like Tharja and Nino, as they can turn these buffs into even more firepower.

Dance is an assist skill that allows the target ally to take another action. Because of this, your allies can move and attack twice to take down foes, or attack and move back to the safe zone so that they won't be taken out during the enemy phase. It has high strategic value and it allows Dorothea and Lene to become a part of many team compositions.

Take note that this won't be applied when an ally is refreshed through Dorothea's Harmonized Skill!

Atk/Spd inflicted onto a wide area

Plegian Dorothea's C skill, Atk/Spd Rein 3 inflicts -4 Atk/Spd on foes within 2 spaces during combat. It helps both Dorothea and allies as the range is modest and it affects enemies even if Dorothea is not directly part of combat. 'Dorothea's flying movement makes it easy to position her in effectively utilizing this skill. It is an in-combat buff which makes it easy to stack with other debuffs such as Atk Ploy 3.

Combined with Fell Candelabra's debuffs and Firestorm Dance 2, this skill allows slower allies to catch-up to faster enemies. This protects them from follow-up attacks and maybe even allow them to score follow-up attacks on their own!

Swift Impact grants Spd+7 and Res+10 to Plegian Dorothea when she initiates combat, This skill also prevents an enemy follow-up attack. In addition to making her extemely durable to magic-wielding foes, it also allows her to score more follow-up attacks as her C skill and weapon skill will help reduce the foe's Spd even more

Duo's Hindrance is a structure in Aether Raids that prevents Duo Heroes from activating their Duo Skills from turns 1 to 3. This is a major strategic hindrance so make sure to take it out if your strategy needs you to do so. Bring in a ranged unit with high mobility like Reinhardt or Veronica in your team so that you can easily take out buildings that counter your team.

You can also bring Reginn as her extremely good mobility through Canto 3 allows her to take out a building and then retreat to safety thereafter.

As a flying unit, Plegian Dorothea takes 1.5x damage from bows and weapons effective on flying units. Be sure to keep them out of the range of archers and leave them to other units. To make things worse for her, her Def stat is very low so a shot from a powerful bow unit is fatal!
Heroes with Effective Skills

Should you Unlock Potential for Plegian Dorothea?

Dorothea - Twilit Harmony Only Appears as a 5 Star Hero!

Plegian Dorothea as a Source Hero

Plegian Dorothea can be used to inherit Swift Impact or Atk/Spd Rein 3. However, Plegian Dorothea is a very versatile special hero that can provide lots of utility for your lineups. Please think carefully before fodderring her off. Because of the nature of her kit, she can be a very valuable piece in solving Resonant Battles so we recommend that you secure at least one copy before fodderring her skills off.

How to Get Plegian Dorothea / Illustrations / Voice Actor / Quotes

How to Get Plegian Dorothea

Plegian Dorothea is a limited time Hero who can be pulled from a Special Heroes Summoning Event. They do not appear in regular summons.

Register as a member and get all the information you want. (It's free!)
Login
Opinions about an article or post go here.
Opinions about an article or post
We at Game8 thank you for your support.
In order for us to make the best articles possible, share your corrections, opinions, and thoughts about "Plegian Dorothea Builds and Best IVs" with us!
When reporting a problem, please be as specific as possible in providing details such as what conditions the problem occurred under and what kind of effects it had.