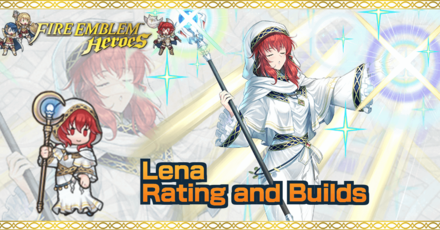 This is a ranking page for the hero Lena - Tender Angel from the game Fire Emblem Heroes (FEH). Read on to learn the best IVs (Individual Values), best builds (Inherit Skill), weapon refinement, stats at Lv 40, and more for Lena.

The best IVs for Lena are +Res and -Atk. A +Res IV helps in meeting the trigger requirement for Atk Ploy 3. Lena, even if she is a Gravity+ kiter, does not need much Atk so it is the best bane she can take.

We recommend a +Spd IV when merging Lena to 10. A Spd IV helps her avoid follow-up attacks giving her more survivability. If you'd prefer having Lena in the backlines as an Atk Ploy 3 debuffer, you can opt for a +Res instead.

Lena's weapon cannot currently be refined. This section will be updated if it becomes refineable in the future!

Lena is a ranged magic attacker (range = 2). Therefore, when not accounting for the Weapon Triangle, the amount of damage she deals will be equivalent to her Atk minus the foe's Res stat.

Lena's Gravity+ prevents target foe and foes within 1 space of target to 1 sace of movement through their next action. This is applied after Lena attacks said enemy. If combined with Dazzling Staff and a movement-assist skill from an ally such as Draw Back, Lena can continuously kite an enemy while dealing little chunks of damage. This is very useful for setting up kills for your Arena bonus units.

Atk Ploy is a Strong Debuff

Atk Ploy 3 inflicts -5 Atk to enemies in cardinal directions if Lena's Res is more than their Res. Lena's Res is pretty decent so the only think you need to worry about is positioning her properly in order to reduce the damage taken by your team. This kind of debuff fits her role as a healer because she is able to stay in the rear of your team while still being able to debuff enemies.

Lena's Spd and Def are very low. This makes it hard for her to deal with speedy physical attackers. Make sure she is always in the rear to keep her safe from attacks. This would not compromise her ability to contribute to your team as she can safely heal from this range and Atk Ploy 3 has great range.

Should you Unlock Potential for Lena?

Lena as a Source Hero

Lena can be used to inherit the skills Gravity+ or Atk Ploy 3. However, Lena can be a very valuable staff user that can either be in the backlines as a heal-debuff unit or a Gravity kiter. Please think carefully before fodderring her off.

How to Get Lena / Illustrations / Voice Actor / Quotes

How to Get Lena

Lena is a Hero who can be pulled from any summon.

Register as a member and get all the information you want. (It's free!)
Login
Opinions about an article or post go here.
Opinions about an article or post
We at Game8 thank you for your support.
In order for us to make the best articles possible, share your corrections, opinions, and thoughts about "Lena Builds and Best IVs" with us!
When reporting a problem, please be as specific as possible in providing details such as what conditions the problem occurred under and what kind of effects it had.