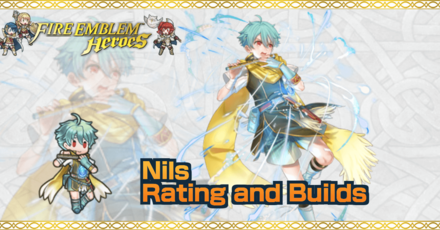 This is a ranking page for the hero Nils - Bright Bard from the game Fire Emblem Heroes (FEH). Read on to learn the best IVs (Individual Values), best builds (Inherit Skill), weapon refinement, stats at Lv 40, and more for Nils.

Nils's best IVs are +Spd and -Res. +Spd will allow Nils to get more follow-up attacks, while reducing the number he takes from his foes. On the other hand, -Res is the most likely the safest option for a flaw stat on this hero.

Since it will increase the effectiveness of his B and C skills, +HP is a good IV as well. If you mainly intend to use Nils for support, +HP will be beneficial to your party.

If you are building a +10 merged Nils, we recommend +Spd. With a Spd boon and 10 merges, Nils's Spd stat will reach 42, allowing him to get follow-up attacks on even more foes. Once again, if you want to increase the effectiveness of his default B and C skills, +HP is a solid option as well.

Nils's weapon cannot currently be refined. This section will be updated if it becomes refineable in the future!

Nils is a close magic attacker. Therefore, the damage he deals is equal to his Atk minus the foe's Res when the effects of the weapon triangle are not considered.

Nils's weapon skill Frost Breath will inflict -4 to all stats of a nearby foe at the start of the turn and when Play is used. This means he can inflict a penalty on a foe, have an ally take them down, use Play to refresh that unit and debuff another foe, and subsequentially take that unit down. This makes it very easy to make use of Nils as your team's support and refresher unit.

The B Skill Even Pulse Tier will inflict special cooldown count +2 on an enemy whose special is ready. As long as the conditions of the skill are met, this skill can be triggered regardless of Nils's position on the map, and it is particularly strong against foes like Ophelia in Aether Raids, as well as other units with a quick cooldown.

Speeds up the special cooldown of allied infantry

The C skill Infantry Pulse will reduce the cooldown count of infantry units at the start of the first turn. This will work on all allies whose HP is lower than Nils's, and it stacks with other similar skills, meaning it can be paired with Heavy Blade or Breaker weapons.

Since Nils is a dragon unit, he will take 1.5x damage from dragon-effective weapons, such as the ones used by Legendary Julia and Fallen Tiki. Be sure to keep him away from foes with this type of weapon.

Should you Unlock Potential for Nils?

Nils - Bright Bard Only Appears as a 5 Star Hero!

Nils as a Source Hero

Nils can be used to inherit Even Pulse Tie 3. However, he is a very useful refresher unit with excellent exclusive skills, so we recommend leveling and building Nils before foddering or merging any duplicates.


How to Get Nils / Illustrations / Voice Actor / Quotes

How to Get Nils

Nils is a Hero who can be pulled from any summon.

Register as a member and get all the information you want. (It's free!)
Login
Opinions about an article or post go here.
Opinions about an article or post
We at Game8 thank you for your support.
In order for us to make the best articles possible, share your corrections, opinions, and thoughts about "Nils Builds and Best IVs" with us!
When reporting a problem, please be as specific as possible in providing details such as what conditions the problem occurred under and what kind of effects it had.