My Summoner Guide: How to Make a Custom Character | Fire Emblem Heroes (FEH)

This is a guide to the My Summoner feature in Fire Emblem Heroes (FEH), where you can transform Kiran into a custom character. Read on for more information about Summoner customization, accessories, the copy skills feature, and more!

What is My Summoner? 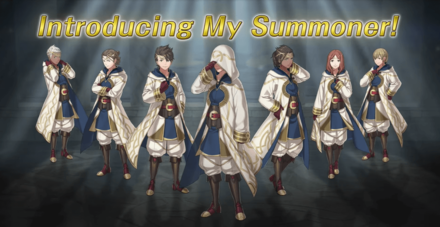 Coming in the next Fire Emblem Heroes version update, My Summoner is a feature that will allow players to customize and finally dispatch their in-game avatars to the battlefield.

For the first time, this will allow you to control how Kiran (the FEH tactician) looks, and use them as a character.

How to Use My Summoner (Character Customization) 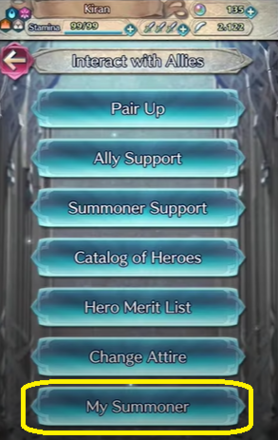 My Summoner can be accessed through the Interact with Allies inside the Allies tab of the main menu. 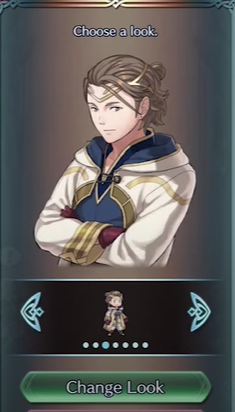 Within the screen, you can set up your greeting when you visit a friend's castle, your in-game name, and even your appearance! 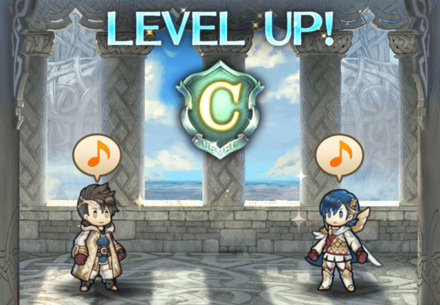 You updated appearance will reflect in certain situations, such as Summoner Supports. 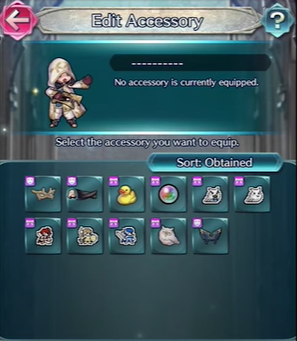 Players can also outfit their Summoner with different accessories. You can equip accessories that have already been equipped to another unit in your barracks.

A Summoner-only accessory, S(Blindfold), will be available to be equipped the first time you enter the menu.

There are more accessories in the Accessories Shop when you visit it in your Aether Resort, so be sure to give those a look!

Hopefully we get more accessories down the line to enhance the Summoner's look, through events such as Forging Bonds, etc.

My Summoner (Kiran) Stats and Skills

Stats with only Dire Breidablik equipped

Your Summoner comes with Dire Breidablik, a colorless tome, as their default weapon! 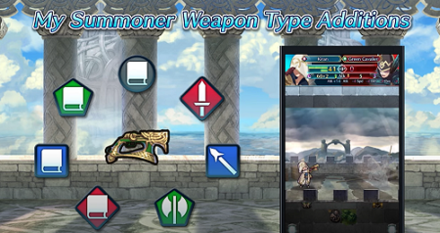 As of the 5/6/2021 update, you can also change its appearance, letting your Summoner have either a sword, lance, axe, red tome, blue tome, or green tome!

Making your Summoner a support unit with other buff and debuff skills seems like a really good idea to build them! For more build ideas, see our builds guide for Kiran (Summoner).

To be able to stand next to your allies in battle, you'll need powerful skills. 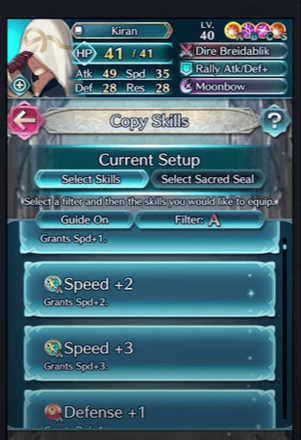 With the Copy Skills feature, the Summoner can take any skill from any unit currently within their barracks (that matches their weapon and movement type, of course).

You can even copy skills from combat manuals!

Copy Skills is available within the My Summoner customization tab.

Unlike Skill Inheritance, which consumes the unit that skills are being taken from, allies will not be affected by the Summoner copying their skills, allowing for skill optimization even from F2P players!

Sacred Seals can also be copied - your Summoner can equip the same seal that an ally unit is currently equipping. 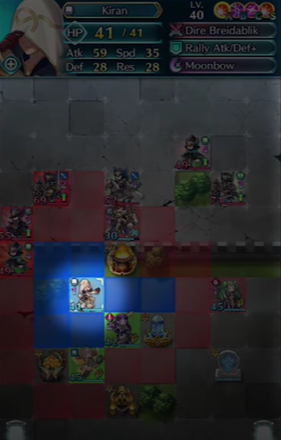 For now it looks like the only game mode that the Summoner can be dispatched into is Mjolnir's Strike.

As a Colorless Tome, Infantry unit, the Summoner will be able to take out enemy units without worrying much about the weapon triangle, unless an enemy Hero unit appears with a colorless-effective weapon, such as Gronnraven+. Be sure to watch out if that happens!

Hopefully more game modes where the Summoner can participate will be added in the future, but for now, being able to battle alongside your units is sure to be fun! 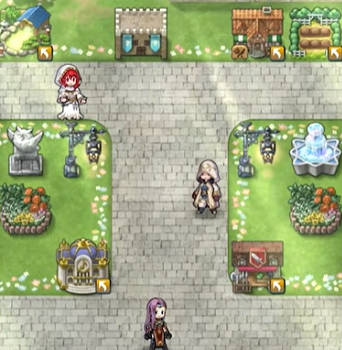 As of the 5/6/2021 update, your Summoner can now hang out with other Heroes in the Aether Resort!

The Aether Resort can be accessed through the Aether Raids tab on the Battle screen.

Register as a member and get all the information you want. (It's free!)
Login
Opinions about an article or post go here.
Opinions about an article or post
We at Game8 thank you for your support.
In order for us to make the best articles possible, share your corrections, opinions, and thoughts about "My Summoner Guide: How to Make a Custom Character" with us!
When reporting a problem, please be as specific as possible in providing details such as what conditions the problem occurred under and what kind of effects it had.