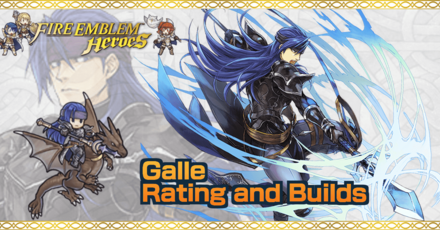 This is a ranking page for the hero Galle - Azure Rider from the game Fire Emblem Heroes (FEH). Read on to learn the best IVs (Individual Values), best builds (Inherit Skill), weapon refinement, stats at Lv 40, and more for Galle.

As a hero obtainable only through Grand Hero Battle, Galle will always have neutral IVs by default. The only way to access IVs for this unit is through using Trait Fruits.

The best IVs for Galle are +Res and -HP. Galle is mainly a physical wall, but he has the potential to become a dual wall if he is given some points to Res. This justifies a +Res IV on Galle as balanced defensive stats is ideal for survival. His HP is of less importance so it can be safely taken as a bane. You can easily get multiple copies of Galle so make sure to get at least +1 merge to get rid of this bane as HP to him is still important to a degree.

If you are trying to build a +10 Merge Galle, +Res is the best IV. With a +10 merge, Galle's Res reaches 35, which is enough to survive lots of magic attacks considering you still have skills to boost it up. If you prefer Galle to specialize solely on taking physical attacks, you can take a +Def IV instead. You can also take a +Atk IV if you need Galle to be more offensively oriented.

This build is requires very minimal investment, but it makes Galle very effective in both phases if he gets to Brazen range. By simply slapping a Brazen Spd/Res 3 Sacred Seal, he can enjoy huge bonuses across his stats just by taking damage. Of course, his offensive power will also be boosted by Odd Atk Wave 3 half of the time so make sure to not forget to utilize that when engaging more powerful foes. Lastly, Vantage 3 makes use of his great bulk by giving him more tools in the enemy phase. What is great with Vantage 3 is that it has an identical trigger condition to his Brazen skills. A generic strategy with this build is to engage an enemy that can safely get Galle into Brazen range and engaging more powerful foes from that point on.

Galle's weapon cannot currently be refined. This section will be updated if it becomes refineable in the future!

Galle is a close physical attacker (range = 1). Therefore, when not accounting for the Weapon Triangle, the amount of damage he deals will be equivalent to his Atk minus the foe's Def stat.

Galle has the weapon skill Guard Lance+ which, as the name might imply, “Guards” you from your foe's special skill by inflicting special cooldown charge -1. However, unlike Guard 3, this effect will always trigger in combat, making it very difficult for an opposing foe to deal special damage.

Guard 3 requires a trigger condition before activation : Having 80% HP or higher

Galle has a base Def or 38 which is excellent if he wants to soak up physical attacks. His Res is at 28 which is slightly above average so with some IVs and merges, he can definitely tank both kinds of attacks. With Guard Lance+, and other skills he can be a great wall in most situations.

He does have a glaring weakness to bow users with high Spd or bow users that use Brave Bow+. Be mindful of his position in relation to these units! Use his great flying mobility to your advantage.

Team gets an Atk boost on odd-numbered turns

Galle's default C skill Odd Atk Wave will grant Galle and adjacent allies Atk+6 on odd-numbered turns. Since this C skill actually gives the bonus to Galle and not just his allies, the combined effect of this skill and Brazen Atk/Def 3 gives Galle Atk +13 when entering combat on odd-numbered turns. Of course, this is if Brazen Atk/Def 3 is activated.

If you prefer, you can follow our Budget Galle build and get another Brazen skill in his Sacred Seal slot. Our builds section includes an explanation on how to use this simple yet effective build.

Galle's Spd at Lv. 40 is only 22. This makes him very vulnerable to follow-up attacks! This weakness can make Galle pretty squishy despite his high defenses. Be mindful of his positioning against units that can score follow-up attacks on him.

As a flying unit, Galle takes 1.5x damage from bows and weapons effective on flying units. Be sure to keep them out of the range of archers and leave them to other units.

Should you Unlock Potential for Galle?

We Do Not Recommend Unlocking Potential for Galle - Azure Rider!

Galle as a Source Hero

Galle can be used to inherit the skills Guard Lance+ or Odd Atk Wave 3. However, you can only acquire Galle from Grand Hero Battles or from using Heroic Grails, so think carefully before foddering her off.

How to Get Galle / Illustrations / Voice Actor / Quotes

How to Get Galle

Galle is a Hero who, for a limited time, can be obtained through completing a Grand Hero Battle for the first time. They do not appear in regular summons. After the event has ended, they can be obtained by using Heroic Grails.

Register as a member and get all the information you want. (It's free!)
Login
Opinions about an article or post go here.
Opinions about an article or post
We at Game8 thank you for your support.
In order for us to make the best articles possible, share your corrections, opinions, and thoughts about "Galle Builds and Best IVs" with us!
When reporting a problem, please be as specific as possible in providing details such as what conditions the problem occurred under and what kind of effects it had.