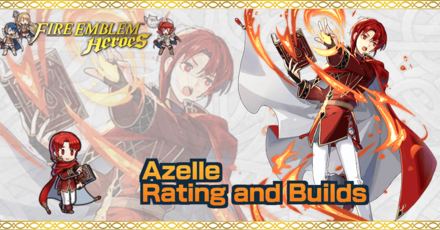 This is a ranking page for the hero Azelle - Youthful Flame from the game Fire Emblem Heroes (FEH). Read on to learn the best IVs (Individual Values), best builds (Inherit Skill), weapon refinement, stats at Lv 40, and more for Azelle.

The best IVs for Azelle are +Atk and -Def. As discussed in Azelle's Roles, Strengths, and Weaknesses section, he can create large gaps in Spd between his team and the enemy so he does not need aid in Spd through IVs. The efficient way to maximize his offenses is through increasing +Atk to take advantage of the frequent follow-up attacks he will be scoring.

We recommend a +Atk IV when merging Azelle to 10. This is for the same reasons as above. With +10 merges, Azelle's Atk stat will reach 58 with the weapon skill. Without a doubt, he will hit hard especially when the strengths Sparking Tome is taken advantage of.

A simple budget build for Annand that takes advantage of his huge Spd levels but getting a Flashing Blade 3 Sacred Seal to make for easy, consitent Moonbow activations. This puts his firepower to high levels so don't underestimate it just because its cheap!

Azelle's weapon cannot currently be refined. This section will be updated if it becomes refineable in the future!

Azelle's Sparking Tome, inflicts -6 Spd/Res on foe when he enters combat. He also inflicts an additional penalty to Spd/Res depending on the bonuses they have for that skill. This ensures that opponent's Spd/Res stats are always in low levels allowing Azelle to be lethal in most situations.

The debuffs of Sparking Tome are easily observed in this scuffle with an enemy unit.

R Duel Infantry 4 is a special skill that treats the unit’s stats as 175 in the Arena, allowing your overall score to increase when using Azelle. It is usable by any red infantry unit, so equip it and increase your score as you would like, but keep in mind that as an A slot skill it means you will lose the ability to useful, powerful A skills like Fury 4 or Atk/Spd Solo 4.

Because it is an upgrade from R Duel Infantry 3, it also gives Atk/Spd/Def/Res +2 on top of the original +5 HP.

Can create a huge Spd gap as a support unit!

With Azelle's support, even slower units can nail follow-up attacks on powerful foes! This is all thanks to:

The only thing Azelle cannot benefit directly from this list is Rally Up Spd+ as it excludes the user from the effect. Also, unless a refresher-assist support is in range, he cannot take advantage of the Spd debuffs granted by Spd/Res Ruse 3 as he will have already used up his action. If he lands a counterattack in the ensuing enemy phase however, he will still benefit from the debuffs.

Spd/Res Ruse 3 also inflicts Guard on the foe, slowing their Special activations. When you get a great Ruse activation with Azelle, it can really provide your team with a window of opportunity to charge in and take many foes out.

Azelle's Def and Res sit at only 28 and 25 respectively. This makes him somehow fragile. This is why we have a Null Follow-Up build for him as a follow-up attack from a slower, but hard-hitting foe can easily spell Azelle getting knocked out.

While R Duel Infantry 4 does give some nice stats, the A skill can be home to very powerful skills that are cornerstones for great builds. If you plan to use Azelle outside of the Arena, make sure to get him an A skill that allows him to perform better in combat.

Should you Unlock Potential for Azelle?

Azelle - Youthful Flame Only Appears as a 5 Star Hero!

Azelle as a Source Hero

Azelle can be used to inherit R Duel Infantry 4 or Joint Hone Spd. Rally Up Spd+ and Spd/Res Ruse 3 carry value too, but you are better off getting the 2 most valuable skills instead.

Take note that, R Duel Infantry 4 is rarer Joint Hone Spd as of Feb 2021. Keep this in mind when picking a skill to fodder. However Azelle is a powerful unit since Sparking Tome is a nice skill to build around upon so please think carefully before fodderring him off.

How to Get Azelle / Illustrations / Voice Actor / Quotes

How to Get Azelle

Azelle is a Hero who can be pulled from any summon.

Register as a member and get all the information you want. (It's free!)
Login
Opinions about an article or post go here.
Opinions about an article or post
We at Game8 thank you for your support.
In order for us to make the best articles possible, share your corrections, opinions, and thoughts about "Azelle Builds and Best IVs" with us!
When reporting a problem, please be as specific as possible in providing details such as what conditions the problem occurred under and what kind of effects it had.