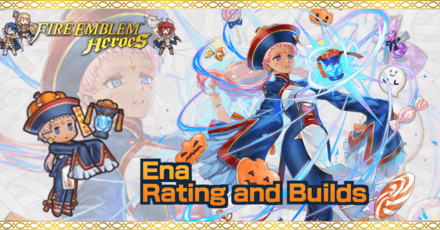 This is a ranking page for the hero Ena - Autumn Tactician from the game Fire Emblem Heroes (FEH). Read on to learn the best IVs (Individual Values), best builds (Inherit Skill), weapon refinement, stats at Lv 40, and more for Ena. 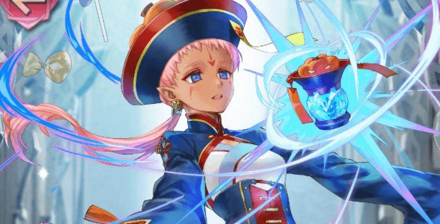 Note: Ena's stats will always have no IVs.

As a hero obtainable only through Tempest Trials, Ena will always have neutral IVs by default. The only way to access IVs for this unit is through using Trait Fruits.

The best IVs for Ena are +Atk and -Spd. She is mainly an offensive unit, but she does not depend on Spd for follow-up attacks to do so. Maximize her Atk stat to deal the most damage with Ena!

We recommend a +Atk IV when merging Ena to 10. This is for the same reasons as above. At this point, she can take out lots of units with 1 hit especially if they are ranged foes. You can also go for a +Res Ena for a tankier build.

Ena's weapon cannot currently be refined. This section will be updated if it becomes refineable in the future!

Ena is a close magic attacker (range = 1). Therefore, when not accounting for the Weapon Triangle, the amount of damage she deals will be equivalent to her Atk minus the foe's Res stat.

Pale Breth ensures that Ena's Atk/Res is at optimum levels

Pale Breath+ neutralizes Atk/Res penalties on Ena and on top of that, it grants +5 Atk/Res to her. This only activates if Ena is within 2 spaces of an ally so always pay attention to her positioning in relation to your other units.

Pale Breath+ also grants Ena adaptive damage against ranged foes. This adaptive damage works on both phases. Try to aim for match-ups that make use of this effect. Find a ranged target and dive right in!

Fling Allies into Combat and Buff Them Simultaneously!

Def/Res Link 3 buffs Ena and any ally who uses a movement-assist skill or receives one from Ena by +6 Def/Res. Since Ena has access to Swap, she can make use of this skill to push an ally deep into enemy danger zones while providing them with buffs. The buffs will be enough to make them sturdier upon being in the danger zones.

It can also be used to help an ally retreat from an ememy who can easily take them down. Since Ena is also affected by the buff, she too can be flung into danger zones with skills like Shove or Smite!

Ena's C skill, Ward Dragons grants +4 Def/Res to all dragon allies within 2 spaces of Ena. This allows her to provide some defensive support in all-dragon teams. It fully stacks with the bonuses fron Def/Res Link!

Ena takes 1.5x damage from dragon-effective weapons like Falchion or Naga, and one blow from these types of weapons is sure to take her down. Make sure you know what weapons you are up against before hopping too far into the line of battle!

Should you Unlock Potential for Ena?

We Recommend You Unlock Potential for Ena - Autumn Tactician!

Ena as a Source Hero

Ena can be used to inherit the skills Pale Breath+ or Ward Dragons. However, you can only acquire Ena from Tempest Trials+ or from using Heroic Grails. Ward Dragons is rare on a free unit so take note of this!

How to Get Ena / Illustrations / Voice Actor / Quotes

How to Get Ena

Ena is a limited time Hero who can be obtained as a reward for your score in the Tempest Trials. They do not appear in regular summons. After the event has ended, they can be obtained by using Heroic Grails.

Register as a member and get all the information you want. (It's free!)
Login
Opinions about an article or post go here.
Opinions about an article or post
We at Game8 thank you for your support.
In order for us to make the best articles possible, share your corrections, opinions, and thoughts about "Ena Builds and Best IVs" with us!
When reporting a problem, please be as specific as possible in providing details such as what conditions the problem occurred under and what kind of effects it had.