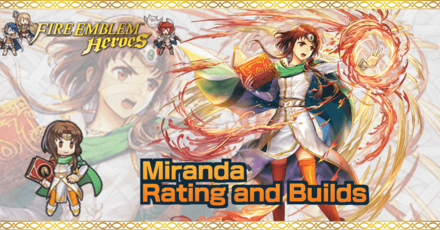 This is a ranking page for the hero Miranda - Willful Princess from the game Fire Emblem Heroes (FEH). Read on to learn the best IVs (Individual Values), best builds (Inherit Skill), weapon refinement, stats at Lv 40, and more for Miranda.

The best IVs for Miranda are +Atk and -Res. A higher Atk stat allows Miranda to deal more damage with each attack. Her Def is really low and she cannot afford to take a bane in said stat without a compromise in gameplay so it is better to take a bane in Res instead as she can take some points off it.

We recommend a +Atk IV when merging Miranda to 10. This is for the same reasons as above. As she is mainly an offensive unit, increasing her damage is a must! You can also go for a +Spd IV, but take note that she still needs support to consistently nail follow-up attacks as her Spd is above average, but its not an elite range.

Miranda's weapon cannot currently be refined. This section will be updated if it becomes refineable in the future!

Miranda is a ranged magic attacker (range = 2). Therefore, when not accounting for the Weapon Triangle, the amount of damage she deals will be equivalent to his Atk minus the foe's Res stat.

Buff When Attacked by Ranged Foes

Rauðrserpent+ has the same effects as Distant Def 3. This buffs Miranda's defenses whenever she is attacked by ranged units. Since its an in-combat buff, it stacks with skills such as the mentioned Distant Def 3 to stack more defenses against ranged units. You can also get the Swift Stance 3 that is available from Ronan a unit available from the same banner. This makes Miranda a strong matchup against magic units in the enemy phase.

Miranda enjoys a +6 Def, +6 Res as she gets initiated on by the green mage

Spd/Res Gap 3 grants a +5 Spd/Res to your ally who has the highest total Spd + Res stat. Knowing your team's stats beforehand makes this a super easy buff to cast.

Take note that the buff will active regardless of Miranda's position in relation to the qualified unit. Make sure to take advantage of this range to improve your team's matchups against speedy magic attackers!

Should you Unlock Potential for Miranda?

We Do Not Recommend Unlocking Potential for Miranda - Willful Princess!

Miranda as a Source Hero

Miranda can be used to inherit Seal Atk/Res 2 or Spd/Res Gap 3. Both are useful skills that are great on a support-type unit. You can also inherit Rauðrserpent+ from her, but it is has a pretty niche use case compared to other inheritable tomes as tome units are most likely centered around the player phase.

How to Get Miranda / Illustrations / Voice Actor / Quotes

How to Get Miranda

Miranda is a Hero who can be pulled from any summon.

Register as a member and get all the information you want. (It's free!)
Login
Opinions about an article or post go here.
Opinions about an article or post
We at Game8 thank you for your support.
In order for us to make the best articles possible, share your corrections, opinions, and thoughts about "Miranda Builds and Best IVs" with us!
When reporting a problem, please be as specific as possible in providing details such as what conditions the problem occurred under and what kind of effects it had.