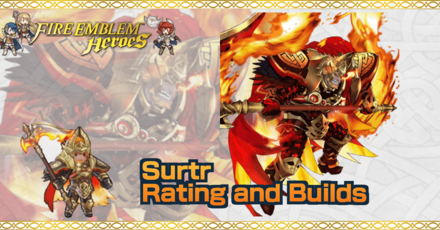 This is a ranking page for the hero Surtr - Ruler of Flame from the game Fire Emblem Heroes (FEH). Read on to learn the best IVs (Individual Values), best builds (Inherit Skill), weapon refinement, stats at Lv 40, and more for Surtr.

Being the tank that he is, Surtr will do well with +Def and -Spd IVs. With his superboon in Def, Surtr's Def stat increases by +4, making his already high Def stat even better and increasing his survivability. His Spd stat is the ideal dump stat, so it is the best one to have a bane in.

+ Atk is a good IV as well. Since this stat is also a superboon, he will get +4 to his Atk, and after dealing fixed damage to nearby enemies, he will generally be able take down their remaining HP in a single blow.

Surtr’s skills are great right out of the box, so this build simply fills the empty assist skill and sacred skill slot. When Surtr’s Menace is activated, he gains a total of +22 to his Def, making him amazing wall. Hardy Bearing would also work well in the Sacred Seal slot due to the fact that it can prevent a defending foe from attacking first (through the effects of Vantage triggering after Sinmara).

Surtr's Exclusive Weapon currently cannot be refined. This section will be updated if it becomes refinable in the future.

Surtr is a close-range physical attacker. When the effects of the Weapon Triangle are not taken into account, the damage he deals will be equal to his Atk minus the foes's Def.

Including the bonus from Surtr's exclusive weapon, he has a base Def of 43, putting him among the top of all FEH units. He also boasts a Res stat of 33, making him capable of tanking attacks from nearly any type of enemy. His default skills Steady Stance 4 and Wary Fighter 3 also contribute to his extreme defensive capability. If you are ever unsure of who to put in a team when making a new one, Surtr is powerful enough to team with any other ally.

Exclusive weapon deals 20 points of fixed damage to nearby units

Surtr's exclusive weapon skill Sinmara deals 20 damage to all foes within two spaces at the start of your turn. Since this fixed damage completely disregards things like enemy Def or Res, it will be very useful against the many armored units with high defensive stats that appear in Aether Raids and Arena Battles. Just note that you cannot defeat an enemy with fixed damage, as 1 HP will alwways be left over, so Surtr or one of your allies will need to deal the final blow.

Watch out for weapons that are effective on armored

As an armored unit, Surtr will take additional damage from weapons like Armorslayer. Be sure and check which weapons your opponents are using before getting too close.

Watch out for Null Follow-Up and Axebreaker skills

Skills like Null Follow-Up and Axebreaker will allow an enemy to circumvent Wary Fighter and get away with a follow-up attack. Additionally, Wary Fighter only works when Surtr's HP exceeds 50%, so be sure and prevent Surtr's health from falling this low, as that is when he becomes most vulnerable.

Allies who can boost Surtr's mobility

As an armored unit, Surtr can only move one space at a time. Therefore, party members with Guidance and Armor March are very useful for helping Surtr get across the map. In particular, a hero with a refresher skill can significantly increase Surtr's mobility.

Allies who can take down red foes

Teaming Surtr with a unit who can easily take down red units increases Surtr's survivability. A high powered attacker like Ophelia, or even one with very strong defensive stats like Legendary Tiki can help cover Surtr's weakness when it comes to this type of unit.

Although Surtr has great defensive stats, it is still very possible for a powerful red unit to come along and OHKO him, In particular, Lilina and Celica are guaranteed to take him out when attacking, so Surtr will need to keep his distance from them. Additionally, you need to look out for Legendary Alm, with his powerful exclusive weapon and special skill combo.

Despite his incredible Def, Surtr is still susceptible to attacks from foes with weapons that are effective on armor. Idunn and Hoshidan Micaiah can easily sweep Surtr, so let him take cover behind other allies when these foes are present.

Should you Unlock Potential for Surtr?

Surtr - Ruler of Flame Only Appears as a 5 Star Hero!

Surtr as a Source Hero

If you wish to use Surtr as a source hero, we recommend taking the skill Steady Stance 4. However, Surtr is an extremely powerful unit, so before foddering him off, we recommend keeping and leveling up at least one.

How to Get Surtr / Illustrations / Voice Actor / Quotes

How to Get Surtr

Surtr is a Hero who can be pulled from any summon.

Register as a member and get all the information you want. (It's free!)
Login
Opinions about an article or post go here.
Opinions about an article or post
We at Game8 thank you for your support.
In order for us to make the best articles possible, share your corrections, opinions, and thoughts about "Surtr Builds and Best IVs" with us!
When reporting a problem, please be as specific as possible in providing details such as what conditions the problem occurred under and what kind of effects it had.