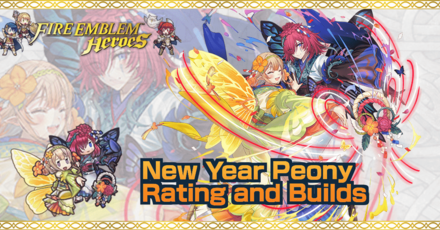 This is a ranking page for the hero Peony - Álfar Dream Duo from the game Fire Emblem Heroes (FEH). Read on to learn the best IVs (Individual Values), best builds (Inherit Skill), weapon refinement, stats at Lv 40, and more for New Year Peony. 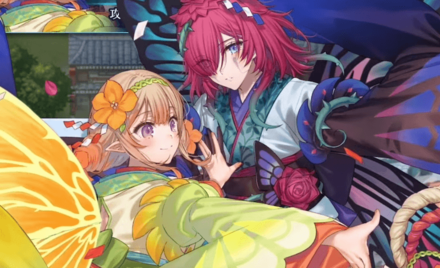 We recommend a +Spd IV when merging New Year Peony to 10. This is for the same reasons as above. At this point with Bond of the Álfar, she reaches 51 Spd so she can definitely become a reliable seconary offensive unit if you are in need of one.

New Year Peony's weapon cannot currently be refined. This section will be updated if it becomes refineable in the future!

New Year Peony is a ranged magic attacker (range = 2). Therefore, when not accounting for the Weapon Triangle, the amount of damage she deals will be equivalent to her Atk minus the foe's Res stat.

New Year Peony's Duo Skill raises her arena score, in addition to unleashing a powerful battle effect. Duo Heroes have a Duo Skill which can be used once per map. Additionally, her Duel effect treats her stats as 185 in Arena modes, giving her a huge advantage over many other heroes.

The effect of New Year Peony's Duo Skill is shown below 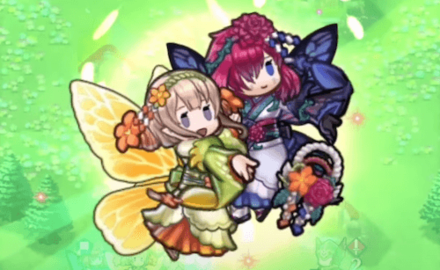 Her Duo Skill grants the following to a qualified ally:

You can read the in-game text for New Year Peony's Duo Skill and the duel component in this section!

New Year Peony's exclsuive skill Gentle Dream buffs an ally while simultaneously granting them another action. Allies who have been granted additional movement, as well as all allies in cardinal directions of both Peony and the ally who gained extra movement, will gain +3 to all stats and be able to move to a space adjacent to any ally within 2 spaces. In addition to being a useful refresher skill, it buffs all allies and grants more mobility, making it one of the best support skills available.

The qualities of this skill make New Year Peony a great Aether Raids defense unit because it can cause raiders that do not plan an attack to make costly mistakes.

When New Year Peony uses Gentle Dream on an ally, her B skill, Res Cantrip 3 gets triggered and it inflicts [red]-7 Res/red] to the nearest foes within 4 spaces of unit. This gives great advantage for Peony and her team as this will help her magical allies to deal more damage to affected enemies.

Possesses the ability to refresh dancers!

Refresher skills like Dance and Gentle Dream cannot refresh units that have refresher skills currently equipped. However, Peony's Duo Skill can! This can make for some interesting strategies that you can run with New Year Peony's kit.

Take note that her Duo Skill also provides +3 to all stats and the ability to warp to a space adjacent to any ally within 2 spaces. You can take advantage of this extra power and mobility by taking out a priority unit!

New Year Peony's exclusive weapon Bond of the Álfar will grant +6 to the Atk of allies within cardinal directions of her. As long as the ally is in one of her cardinal directions, the amount of spaces away they are does not matter, allowing her to buff all allies from a safe distance. This buff also stacks with the effects of Gentle Dream, so she can grant massive bonuses to all allies while giving them extra movement and mobility.

Duo's Hindrance is a structure in Aether Raids that prevents Duo Heroes from activating their Duo Skills from turns 1 to 3. This is a major strategic hindrance so make sure to take it out if your strategy needs you to do so. Bring in a ranged unit with high mobility like Reinhardt or Veronica in your team so that you can easily take out buildings that counter your team.

You can also bring Reginn as her extremely good mobility through Canto 3 allows her to take out a building and then retreat to safety thereafter.

As a flying unit, New Year Peony takes 1.5x damage from bows and weapons effective on flying units. Be sure to keep them out of the range of archers and leave them to other units.

Should you Unlock Potential for New Year Peony?

Peony - Álfar Dream Duo Only Appears as a 5 Star Hero!

New Year Peony can be used to inherit Res Cantrip 3, Atk/Spd Bond 4 or Joint Drive Spd. However, New Year Peony is a very useful special hero that you can only obtain from specific banners. Please think very carefully before fodderring her off.

How to Get New Year Peony / Illustrations / Voice Actor / Quotes

How to Get New Year Peony

New Year Peony is a limited time Hero who can be pulled from a Special Heroes Summoning Event. They do not appear in regular summons.

Register as a member and get all the information you want. (It's free!)
Login
Opinions about an article or post go here.
Opinions about an article or post
We at Game8 thank you for your support.
In order for us to make the best articles possible, share your corrections, opinions, and thoughts about "New Year Peony Builds and Best IVs" with us!
When reporting a problem, please be as specific as possible in providing details such as what conditions the problem occurred under and what kind of effects it had.