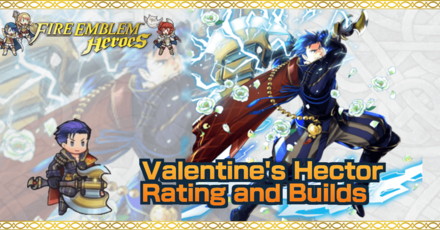 This is a ranking page for the hero Hector - Just Here to Fight from the game Fire Emblem Heroes (FEH). Read on to learn the best IVs (Individual Values), best builds (Inherit Skill), weapon refinement, stats at Lv 40, and more for Valentine's Hector.

The best IVs for Valentine's Hector are +Atk and -Spd. His attack stat is a superboon, which means having a +IV on it gives him at total +4 Atk at Lv.40. This allows him to score one-hit knockouts on many units in the game. Since Wary Fighter can prevent enemy follow-up attacks, -Spd is the ideal bane.

This build utilizes Valentine's Hector's refined weapon, making him deal lots of damage on enemy phase. On enemy attack, he will take damage and be within the Wrath-effect range of his weapon, and then can use Special Fighter's effect to trigger his Special. The heal on his refined weapon will keep him healthy so he can take more hits.

We recommend the Special Effect Refine for Berserk Armads

Berserk Armads' refine not only inflicts Atk/Def-5 on an enemy unit when they attack, but also restores Hector's HP when he deals damage with his Special.

This, coupled with the Special trigger acceleration and the additional +10 damage when it does trigger, makes him very powerful.

Keep in mind that the Wrath effect on the weapon can trigger during combat, so if a foe initiates, they will immediately put Valentine's Hector within range and allow him to retaliate with a large amount of damage.

The healing will also keep him healthy so he can keep triggering this effect over and over.

Valentine's Hector is a close physical attacker (range = 1). Therefore, when not accounting for the Weapon Triangle, the amount of damage he deals will be equivalent to his Atk minus the foe's Def stat.

Berserk Armads accelerates Special trigger cooldown. Addtionally, if Valentine's Hector's HP ≤ 75%, it grants him +10 damage to his special, and special cooldown count -1. Plus 10 damage to a a low coolown special like Glimmer on top of V!Hector's amazing attack stat makes him an offensive powerhouse.

Berserk Armads' effect triggers even when enemies attack Hector, and the refined version will heal him, making it hard for said enemies to take him out. This makes Glimmer almost always ready to activate in the next player phase, which can be game changing if you are in range to take out a high-priority target.

Can Counterattack regardless of range

Hector's Distant Counter allows him to counterattack enemies regardlress of range, as long has they do not have abilities that neutralize this effect. Combined with Armads, Wary Fighter 3, and Glimmer, it makes him a good enemy phase unit.

Because he is an armored unit, he can only normally move 1 space at a time. It is recommended that you inherit skills such as Armor March and Pivot to increase Hector's mobility.

Valentine's Hector takes 1.5x damage from cavalry-effective weapons like Armorslayer+, and one blow from this type of weapon is sure to take him down. Make sure you know what weapons you are up against before hopping too far into the line of battle!
Heroes with Effective Skills

Units that can heal and buff Hector

Although Hector has generally high stats, it always helps to pair him up with characters that are able to buff and heal him. A good example is Bridal Fjorm who can heal, neutralize penalties and prevent enemies from using skills that grant additional actions such as Legendary Azura's Gray Waves.

If you are intending to form an all-armored team, Winter Eirika is a great option, since she is the only armored staff user in the game. This means that she can heal Hector and enjoy armor-exclusive buffs such as Armor March 3.

Units that can deal with red units

Despite Hector's high defense, his Res is rather mediocre. If you are attacked by a red attribute magic user, you will likely be taken out in one turn. Because of this, it is best if you pair up L!Hector with a hero that can easily take out red foes such as Brave Hector or Ophelia.

Units such as Hana have weapons like Armorslayer+ that deals 1.5x to armored units such as V!Hector. Red units like Idunn are armor effective on top of being red magic attackers, so they pose a huge threat to Hector. Always be mindful of Hectors positioning in relation to units that pose a threat to him.

Should you Unlock Potential for Valentine's Hector?

Hector - Just Here to Fight Only Appears as a 5 Star Hero!

Valentine's Hector as a Source Hero

Valentine's Hector can be used to inherit the skills Distant Counter. However, Valentine's Hector is a powerful unit. Unless you have similar units like Hector or L!Hector (or any Hector), it is best that you do not fodder him off, and build around him instead.

How to Get Valentine's Hector / Illustrations / Voice Actor / Quotes

How to Get Valentine's Hector

Valentine's Hector is a limited time Hero who can be pulled from a Special Heroes Summoning Event. They do not appear in regular summons.

Register as a member and get all the information you want. (It's free!)
Login
Opinions about an article or post go here.
Opinions about an article or post
We at Game8 thank you for your support.
In order for us to make the best articles possible, share your corrections, opinions, and thoughts about "Valentine's Hector Builds and Best IVs" with us!
When reporting a problem, please be as specific as possible in providing details such as what conditions the problem occurred under and what kind of effects it had.