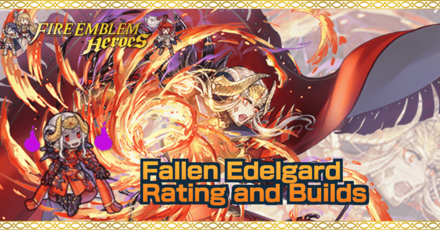 This is a ranking page for the hero Edelgard - Hegemon Husk from the game Fire Emblem Heroes (FEH). Read on to learn the best IVs (Individual Values), best builds (Inherit Skill), weapon refinement, stats at Lv 40, and more for Fallen Edelgard. 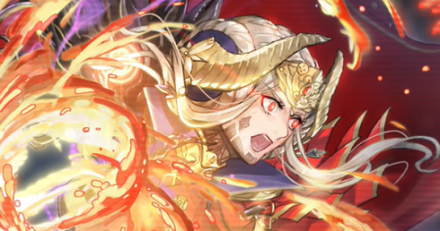 The best IVs for Fallen Edelgard are +Atk and -Spd. Fallen Edelgard is built in a way that she does not need Spd at all. Thanks to her heals damage reduction effects, her best course of action when it comes to IVs is to just improve her offenses! Having said that, taking a Spd bane is the best because it is nigh useless to Fallen Edelgard.

It is also a superboon so you should take advantage of it as much as possible.

We recommend a +Atk IV when merging Edelgard to 10. This is for the same reasons as above and at this point, she will reach 64 Atk. You can also take a +Res IV if you need more bulk against Raven tomes.

A budget build for Fallen Edelgard. With Mystic Boost 3 as her Sacred Seal, she gains sustain and also disables skills that calculate between her lower Def or Res as well as Wrathful Staff users.

A high budget build for Fallen Edelgard. With this build and her high Atk, she'll be able to attack up to 3 times in one turn due to the effects of her weapon and the trigger on Galeforce.

Fallen Edelgard is a close physical attacker (range = 1). Therefore, when not accounting for the Weapon Triangle, the amount of damage she deals will be equivalent to her Atk minus the foe's Def stat.

Can counterattack from any range while transformed 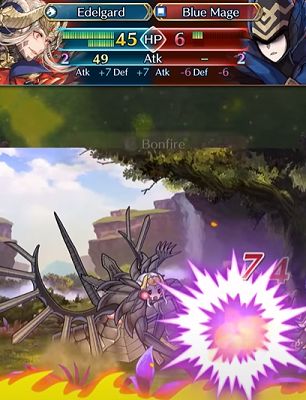 With her exclusive skill Twin-Crest Power, Fallen Edelgard gains Atk +2 when transformed and the ability to counterattack from any range. She will inflicts Atk/Def-6 at the start of combat if her HP is ≥ 25%, meaning that she can tank enemy attacks and then destroy them with a counter.

She will also gain the ability to take another action after combat at the cost of her not being being able to perform a follow-up attack.

This makes her extremely powerful as she can possibly take out several units on a map if utilized correctly.

Can reduce damage through Armored Wall

Fallen Edelgard's B skill, Armored Wall, not only gives her survivability by healing her after combat, but also reduces damage from an enemy unit's first attack by 40% if it's her first combat on the player phase or enemy phase.

Massive firepower thanks to Atk/Def Ideal 4

Atk/Def Ideal 4 gives Fallen Edelgard Atk/Def+7 if her HP is 100% or if she has a bonus on her (with an additional Atk/Spd+2 if both conditions are met).

Thanks to the bonuses from Twin-Crest Power and the heals from Armored Wall, you can achieve both of these trigger conditions easily.

Fallen Edelgard's C skill, Armored Stride 3, allows her to move an extra space if no allies are adjacent to her.

It is much easier to trigger than the other armored mobility skill, Armor March 3 that requires another armored unit to be adjacent to the user. It is very easy to trigger and it allows Fallen Edelhard to move like an infantry unit while boasting the high stats of an armored unit.

Fallen Edelgard will take additional damage from armor, colorless, or beast effective weapons, which can be fatal. She does not have to worry about triangle disadvantage, but be sure to keep her away from enemies with weapons that are effective on her.

Putting Fallen Edelgard into a full Dragon or Beast team will guarantee that she's transformed on Turn 1 and gains access to her Distant Counter effect.

In a full armored Dragon or Beast team, she'll also gain access to buffs such as Hone Armor to activate the effects of her Atk/Def Ideal 4. Alternatively, you can opt to not put her in an armored team and use units that have buffs such as Fortify Beasts or Hone Beasts.

Units with enough investment and possess Null Follow-Up 3 as skills or weapon effects are also effective against Fallen Edelgard, as they'll be able to bypass her weapon's effect.

This is especially potent if paired with Windsweep 3 or similar effects. Summer Byleth (F) will be a tough opponent for her because of this combination.

Due to the healing that Fallen Edelgard has in her kit and because of the Mystic Boost 3 build, units that have Fatal Smoke 3 will be extremely useful in taking her down.

You may need to inherit the skill to another unit (preferably any of the Windsweep 3 or Null Follow-Up 3 users) as Legendary Sigurd and Valentine's Líf may not survive her counterattack.

However, there is a chance that either may be able to defeat her if they are heavily invested in - since both units have guaranteed follow-up attacks that Fallen Edelgard will cancel out, they need to win the speed check to be able to double her.

Fallen Dimitri's Vengeful Lance Effect Will Deal Damage to Her

Fallen Dimitri's Vengeful Lance states that if he has more Atk than his foe's Def and he cannot make a follow-up attack, he will deal damage = 50% of his Atk minus his foe's Def.

This mean that if Fallen Dimitri's Atk is high enough, he will be dealing massive amounts of damage to her and due to the effects of Murderous Lion, Fallen Edelgard will be unable to counterattack.

Heavily invested raventome users or units that are effective against colorless will be able to go up against Fallen Edelgard as she is a colorless unit without an effect that cancels this out.

Having colorless-effective weapons may not be enough firepower, so these units may also need Triangle Adept 3 to boost their kill potential.

Staff units with the Dazzling-Wrathful combination will also be able to chip away at Fallen Edelgard's health, as she will be unable to counterattack.

They may not be able to defeat her outright on Turn 1, but they may be able to chip her HP low enough for her kit's strict HP threshold to not activate and another unit can finish her off.

Edelgard - Hegemon Husk Only Appears as a 5 Star Hero!

Fallen Edelgard as a Source Hero 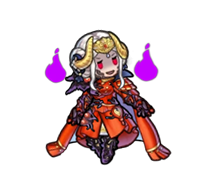 Fallen Edelgard can be used to inherit Atk/Def Ideal 4 and Armored Stride 3. However, Fallen Edelgard is a very powerful hero. Please think carefully before fodderring her off

How to Get Fallen Edelgard / Illustrations / Voice Actor / Quotes

How to Get Fallen Edelgard

Fallen Edelgard is a Hero who can be pulled from any summon.

Register as a member and get all the information you want. (It's free!)
Login
Opinions about an article or post go here.
Opinions about an article or post
We at Game8 thank you for your support.
In order for us to make the best articles possible, share your corrections, opinions, and thoughts about "Fallen Edelgard Builds and Best IVs" with us!
When reporting a problem, please be as specific as possible in providing details such as what conditions the problem occurred under and what kind of effects it had.