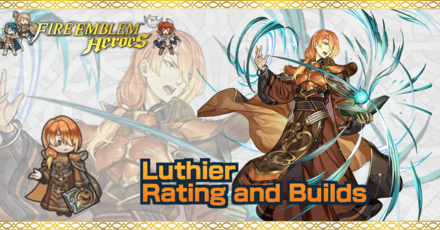 This is a ranking page for the hero Luthier - Odd Wayfarer from the game Fire Emblem Heroes (FEH). Read on to learn the best IVs (Individual Values), best builds (Inherit Skill), weapon refinement, stats at Lv 40, and more for Luthier. 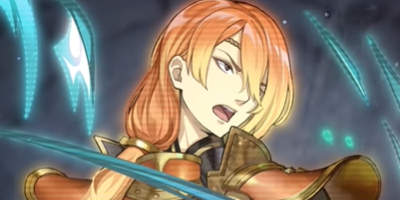 The best IVs for Luthier are +Atk and -Spd. A +Atk IV will effectively raise Luthier's overall firepower.

Luthier has already low Def so you can take this as a bane.

We recommend a +Atk IV when merging Luthier to 10. This will enable him to hit 54 Atk at +10, which will help him in dealing parge amounts of damage when he attacks.

This is a build designed to give Luthier the most points in Arena. These premium skills will increase his overall firepower while also garnering more points. Any Dual Rally will suffice as the Assist skill, and if you have no Ruptured Sky, Blue Flame or Aether will do, though keep in mind that the latter may take a while to trigger.

This is a budget build for Luthier that increases his firepower with minimal investment.

Luthier is a ranged magic attacker (range = 2). Therefore, when not accounting for the Weapon Triangle, the amount of damage he deals will be equivalent to his Atk minus the foe's Res stat.

Luther's various debuffs as seen above!

Gronnfox+ inflicts an in-combat -4 Atk/Spd/Def/Res to Luthier's foe when he initiates combat. This makes Luthier a great player phase attacker as this can be treated as a Swift Sparrow-like skill. Additionally, it is an in-combat buff which makes it easy to stack with other buffs.

With Guard 3, Luthier can attack without fearing he will receiving a huge amount of damage from a triggered enemy Special.

Though Luthier debuts with Gronnfox+, you can make an argument that this tome is better off with another unit. If you are to make use of him in the long run, we suggest inheriting powerful skills onto him to help him contribute to your team more.

We also recommend getting merges whenever possible. Merges are quite easy to obtain on him as he is a 4★ demote.

Luthier's Def only sits at 24 at Lv. 40. Even though he can reduce damage when initating with Gronnfox+ and prevent Specials with Guard 3, you should still pay attention to powerful red physical attackers that can easily take him down.

Luthier - Odd Wayfarer Only Appears as a 5 Star Hero!

Luthier as a Source Hero

All of Luthier's skills have inheritance value!

How to Get Luthier / Illustrations / Voice Actor / Quotes

How to Get Luthier

Luthier is a Hero who can be pulled from any summon.

Register as a member and get all the information you want. (It's free!)
Login
Opinions about an article or post go here.
Opinions about an article or post
We at Game8 thank you for your support.
In order for us to make the best articles possible, share your corrections, opinions, and thoughts about "Luthier Builds and Best IVs" with us!
When reporting a problem, please be as specific as possible in providing details such as what conditions the problem occurred under and what kind of effects it had.