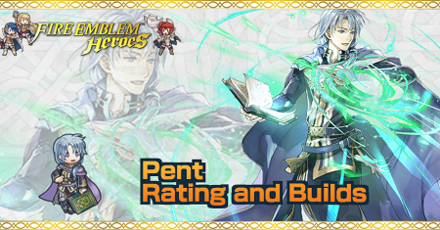 This is a ranking page for the hero Pent - Mage General from the game Fire Emblem Heroes (FEH). Read on to learn the best IVs (Individual Values), best builds (Inherit Skill), weapon refinement, stats at Lv 40, and more for Pent.

The best IVs for Pent are +Atk and -Res. Since Glimmer will almost always be active because of his kit, having a high Atk means Pent can score one-shots on a wide range of foes. For his bane, all of his defensive stats are superbanes, but since he can afford to take some points off Res, a -Res bane is recommended.

We recommend a +Atk IV when merging Pent to 10. With +10 merges, Pent's Atk stat will reach 63. With Glimmer activations, he can take out a lot of priority targets in a match.

You can also go for a +Spd IV if you prefer being less susceptible to follow-up attacks, while being able to score more follow-up attacks! Both Pent's Atk and Spd stats are superboons so you are not at a loss!

A budget build for Pent. His default kit is already good, so you can just supplement him with an assist skill and a Sacred Seal, though you can also swap out his A skill for Atk/Spd Solo 4 for more firepower when outside the Arena.

This build maximizes Pent's offenses instead of making use of the native A skill. Since Moonbow will be almost always active, stacking up Atk on him means that he can take out a wide range of foes upon activation.

Pent's weapon cannot currently be refined. This section will be updated if it becomes refineable in the future!

Pent is a ranged magic attacker (range = 2). Therefore, when not accounting for the Weapon Triangle, the amount of damage he deals will be equivalent to his Atk minus the foe's Res stat.

Tome of Reglay's boosts can be seen above together with the debuffs of Lull Atk/Res 3.

Tome of Reglay grants Special Cooldown count-1 to Pent's allies within 2 spaces that have their Special charge at max.

This makes Pent a good support for several units that would want their Specials charged at the start of the turn like Legendary Lilina and Ophelia.

Due to this effect, we could be seeing Pent in Aether Raids!

G Duel Infantry 4 is a special skill that treats the unit’s stats as 175 in the Arena, allowing your overall score to increase when using Pent.

It is usable by any green infantry unit, so equip it and increase your score as you would like, but keep in mind that as an A slot skill it means you will lose the ability to useful, powerful A skills like Fury 4 or Death Blow 4.

Because it is an upgrade from G Duel Cavalry 3, it also gives Atk/Spd/Def/Res +2 on top of the original +5 HP.

Time's Pulse 3 Allows Him to Trigger His Special More Often

Because Time's Pulse 3 grants Special cooldown charge-1 when his Special is at max charge, you can give Pent a low cooldown Special like Moonbow or Ruptured Sky.

If he doubles during combat, he'll be able to fire off his Special every single time, which will increase his one-shot potential, especially when coupled with the effects of Lull Atk/Res 3.

While G Duel Infantry 4 does give some nice stats, the A skill can be home to very powerful skills that are cornerstones for great builds. If you plan to use Pent outside of the Arena, make sure to get him an A skill that allows him to perform better in combat.

Pent has low Def, which makes him vulnerable against units that deal physical damage.

Make sure you watch out where Pent is positioned after he's done attacking, or use a dancer to make him retreat to safety!

Should you Unlock Potential for Pent?

Pent - Mage General Only Appears as a 5 Star Hero!

Pent as a Source Hero

All of Pent's skills besies Tome of Reglay carries a ton of inhertiance value. If you have the resources to do so, you can inherit G Duel Infantry 3 from another unit, and get G Duel Infantry and one of his B or C skills from one copy of Pent.

Both Lull Atk/Res 3 and Time's Pulse 3 are very valuable skills so choose wisely!

How to Get Pent / Illustrations / Voice Actor / Quotes

How to Get Pent

Pent is a Hero who can be pulled from any summon.

Register as a member and get all the information you want. (It's free!)
Login
Opinions about an article or post go here.
Opinions about an article or post
We at Game8 thank you for your support.
In order for us to make the best articles possible, share your corrections, opinions, and thoughts about "Pent Builds and Best IVs" with us!
When reporting a problem, please be as specific as possible in providing details such as what conditions the problem occurred under and what kind of effects it had.