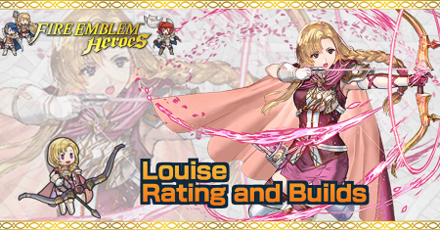 This is a ranking page for the hero Louise - Lady of Violets from the game Fire Emblem Heroes (FEH). Read on to learn the best IVs (Individual Values), best builds (Inherit Skill), weapon refinement, stats at Lv 40, and more for Louise. 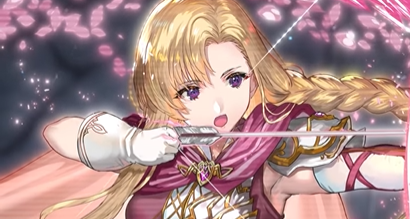 The best IVs for Louise are +Atk and -Res. Her Spd stat together with her Spd buffs and Rein Bow+, is already very high, so it is best that you take a +Atk IV instead to maximize the damage she deals. Take a bane in Res as she an afford it. Taking a bane in Def is not recommended as it is already abysmally low, and it is a superbane for her.

We recommend a +Atk IV when merging Louise to 10. With +10 merges, Louise's Atk stat will reach 56. This is for the same reasons as above. At this point, she is very lethal when she lands a follow-up attack especially against flying foes.

A budget build for Louise. You can swap out her assist skill for either Reposition or Draw Back, and give her another B skill that will suit your party.

A simple Brave Bow setup for Louise if you prefer not to use her Rein Bow+. Even with the Spd penalty of her weapon, she can nail consistent quad attacks thanks to her great Spd stat and skillset. If you are able to get her in range of Brazen Atk/Spd 4 and Desperation 3, she can pick out opponents without having to take further damage.

Louise's weapon cannot currently be refined. This section will be updated if it becomes refineable in the future!

Louise is a ranged physical attacker (range = 2). Therefore, when not accounting for the Weapon Triangle, the amount of damage she deals will be equivalent to her Atk minus the foe's Def stat.

Louise's weapon inflicts Spd/Def-5 on enemy units within 2 spaces during combat. This allows her more opportunities to double and one-shot her foes.

Louise's allies will also be able to take advantage of this buff as long as Louise is in range of their opponent.

Atk/Spd Ideal 4 gives Louise Atk/Spd+7 if her HP is 100% or if she has a bonus on her (with an additional Atk/Spd+2 if both conditions are met).

Paired with her Atk/Spd Oath 3, she's guaranteed to have a bonus active on her as long as she's adjacent to an ally.

This increases her overall firepower and, as mentioned above, allows her more opportunities to double and one-shot her foes.

Take note that Oath skills require her to be adjacent to an ally at TURN START.

Louise's weapon is sadly not a Prf weapon like her husband Pent, so she will be scoring relatively lower in the Arena.

Atk/Spd Ideal 4 is strong, but it is dependent on Louise having 100% HP. Please make sure that Louise has acesss to a convenient healing mechanic that will keep her healthy when tackling harder maps.

Louise has low Def, which makes her vulnerable against units that deal physical damage.

Make sure you watch out where Louise is positioned after she's done attacking, or use a dancer to make her retreat to safety!

Should you Unlock Potential for Louise?

Louise - Lady of Violets Only Appears as a 5 Star Hero!

Louise as a Source Hero

Louise can be used to inherit Rein Bow+ or Atk/Spd Ideal 4. Her other skills, Atk/Spd Oath 3 and Rally Def/Res+ also have great inheritance value.

How to Get Louise / Illustrations / Voice Actor / Quotes

How to Get Louise

Louise is a Hero who can be pulled from any summon.

Register as a member and get all the information you want. (It's free!)
Login
Opinions about an article or post go here.
Opinions about an article or post
We at Game8 thank you for your support.
In order for us to make the best articles possible, share your corrections, opinions, and thoughts about "Louise Builds and Best IVs" with us!
When reporting a problem, please be as specific as possible in providing details such as what conditions the problem occurred under and what kind of effects it had.