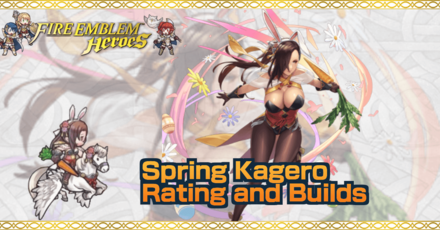 This is a ranking page for the hero Kagero - Spring Ninja from the game Fire Emblem Heroes (FEH). Read on to learn the best IVs (Individual Values), best builds (Inherit Skill), weapon refinement, stats at Lv 40, and more for Spring Kagero.

Spring Kagero's best IV's are +Spd and -HP. With increased Spd Kagero will gain a follow-up attack on most foes, making her very useful in combat. A raised Atk stat is also good for a build with the weapon skill Poison Dagger.

A skill set revolving around Poison Dagger. As long as her Spd exceeds that of the foe, Spring Kagero should be able to prevent counterattacks while safely attacking from a distance, allowing her to cover her weak spots.

This build aims to use as little skill inheritance as possible. Spring Kagero can gain +5 Spd when allies are adjacent via Spd/Red Bond, so Desperation works well in the B slot. When there are no other flying allies in your party Threaten Spd or another stat boosting skill would likely work well in the C slot. Guidance is also a good Sacred Seal for this build.

A user submitted build that is centered around utilizing Windsweep 3! The Special slot can be catered to your needs.

There is no special effect Weapon Refinement for Lethal Carrot+, so if you do want to upgrade it, we recommend the +Spd refinement or possibly +Mt. A +Spd IV combined with this weapon refinement will give Kagero a whopping 40 Spd, which will allow her to double many foes, on top of reducing the amount of follow-up attacks she takes from enemies. However, you may also prefer to give her a different weapon skill, such as Poison Dagger.

Spring Kagero is a ranged physical attacker. Therefore, your unit's Atk minus the foe's Def will tell you the amount of damage she can inflict, when there is no effect from the Weapon Triangle. Additionally, Kagero possesses skills to boost her allies' stas and penalize those of the foes.

Spring Kagero is the first dagger wielding flying unit of FEH. She can attack from a distance while also functioning as a support unit without any interference from the map, making her a rather rare unit.

Spring Kagero's Lethal Carrot+ weapon skill increases the damage she deals from specials by +10. While a special with an low cooldown such as Glimmer obviously has great synergy with this, Blazing Wind or other specials that inflict damage over an area will inflict this additional +10 to each unit in range, making it very powerful for attacking several foes at once.

Gains a Spd and Res boost when an ally is adjacent

Kagero's Spd/Res Bond gives her +5 Spd and Res when an ally is in an adjacent space. This bonus only applies during combat, meaning that other buff skills can stack, and it will not become the target of Panic Ploy.

As a flying unit, Spring Kagero takes heavy damage from bows and other weapons that are effective on flying units. When using her, keep away from the range of archers.

Should you Unlock Potential for Spring Kagero?

Kagero - Spring Ninja Only Appears as a 5 Star Hero!

Spring Kagero as a Source Hero

Spring Kagero can be used to inherit the skills Lethal Carrot+ or possibly Spd/Res Bond 3. However, Spring Kagero is a special hero who does not appear in the normal summoning pool, so think hard before using her as a source hero.

How to Get Spring Kagero / Illustrations / Voice Actor / Quotes

How to Get Spring Kagero

Spring Kagero is a limited time Hero who can be pulled from a Special Heroes Summoning Event. They do not appear in regular summons.

>>4 Thanks for contributing :) Feel free to post more builds! We have made the changes to Kagero's build. You can also give a name if you like!

>>3 Hey guys! OP here, just wanted to tell you I use glimmer now and get a lot more damage than with ruptured sky. Kagero's attack is almost always higher than the target's and if it isn't the target typically has low def. She almost always deals 30 or more damage meaning at least 15 bonus on a 2 cooldown which is incredible. Thanks for posting the build! Glad to contribute lol 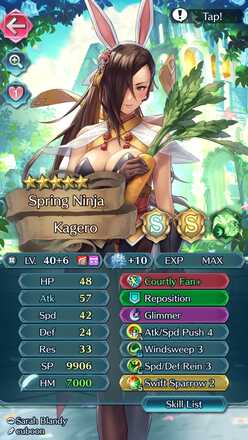 Register as a member and get all the information you want. (It's free!)
Login
Opinions about an article or post go here.
Opinions about an article or post
We at Game8 thank you for your support.
In order for us to make the best articles possible, share your corrections, opinions, and thoughts about "Spring Kagero Builds and Best IVs" with us!
When reporting a problem, please be as specific as possible in providing details such as what conditions the problem occurred under and what kind of effects it had.