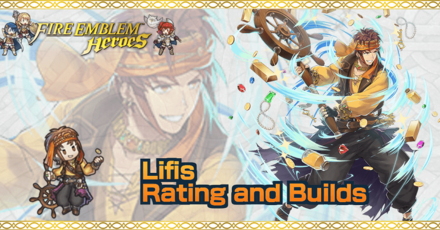 This is a ranking page for the hero Lifis - Terror of Iz from the game Fire Emblem Heroes (FEH). Read on to learn the best IVs (Individual Values), best builds (Inherit Skill), weapon refinement, stats at Lv 40, and more for Lifis.

As a hero obtainable only through Tempest Trials, Lifis will always have neutral IVs by default. The only way to access IVs for this unit is through using Trait Fruits.

The best IVs for Lifis are +Spd and -HP. Lifis has a very high Spd stat and it is wise to invest into it further to win Spd checks and either utilize his native Windsweep 3 if you have it equipped, or reduce the potency of foes with skills based on Spd like Spurn 3. Lifis' Res stat is already low and taking it as a bane will not change the result of most matchups, thus having a Res bane is a safe option.

We recommend a +Spd IV when merging Lifis to +10 for similar reasons. As a speedy attacker, investing further into his Spd is the best choice for his traits.

This budget build uses Lifis similar to most speedy infantry attackers. His HP stat is high enough to survive an attack from the enemy, placing him into Desperation range safely.

This build takes advantage of Lifis' high Spd to maximize the damage reduction given by Spurn 3. Distant Counter allows him to retaliate against ranged foes as well.

Lifis is a close physical attacker (range = 1). Therefore, when not accounting for the Weapon Triangle, the amount of damage he deals will be equivalent to his Atk minus the foe's Def stat.

Lifis has a base Spd stat of 40, which is high compared to most of the cast. This allows him to easily win Spd checks to either activate his native Windsweep 3, or create follow-up attacks if opting for a different B skill.

Lifis also has a high base HP stat of 47. This allows him to easily activate skills with HP conditions like his native Wind Boost 3, or other skills like Panic Ploy 3.

Lifis' native Helmsman Axe+ inflicts a debuff of -4 to the foe's Atk, Spd, Def and Res whenever he is initiating combat. As a speedy infantry attacker, this is right up his alley and plays to his strengths well.

Lifis' base Res stat is very low at only 23. This makes it easy for magic users to take him out. Be mindful of Lifis' positioning in relation to magical units that can easily take him out.

We Recommend You Unlock Potential for Lifis - Terror of Iz!

Lifis as a Source Hero

Joshua thanks you for sparing him.

How to Get Lifis / Illustrations / Voice Actor / Quotes

Lifis is a limited time Hero who can be obtained as a reward for your score in the Tempest Trials. They do not appear in regular summons. After the event has ended, they can be obtained by using Heroic Grails.

Post (0 Comments)
Opinions about an article or post go here.
Opinions about an article or post
We at Game8 thank you for your support.
In order for us to make the best articles possible, share your corrections, opinions, and thoughts about "Lifis Builds and Best IVs" with us!
When reporting a problem, please be as specific as possible in providing details such as what conditions the problem occurred under and what kind of effects it had.