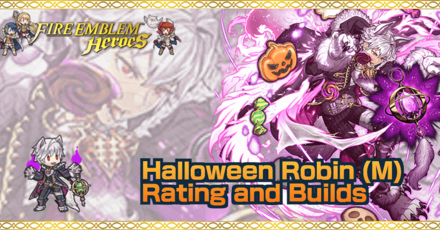 This is a ranking page for the hero Robin - Fall Reincarnation from the game Fire Emblem Heroes (FEH). Read on to learn the best IVs (Individual Values), best builds (Inherit Skill), weapon refinement, stats at Lv 40, and more for Halloween Robin (M).

Halloween Robin (M)'s best IVs are +Atk and -Spd. +Atk helps him boost damage output to eliminate his foes on his counterattacks. His Spd is a dump stat and boosting it will not change most of his matchups, thus it is safe to take as a bane.

If you want to build a +10 merged Halloween Robin (M), we recommend a +Atk IV. Maximizing his Atk ensures that he kills his foes after one round of combat.

+Def is a good option as well to take advantage of the superboon if you're planning on a more defensive approach.

This build uses Distant Counter to allow Far Save tanking for the team. Crafty Fighter is used to provide a Guard effect and a follow-up attack, while Steady Breath provides the Special acceleration.

Near Save / Budget Halloween Robin (M)

This build uses most of Halloween Robin's base kit to function as a Near Save tank for the team. Steady Breath provides the Special acceleration needed to activate Bonfire often.

Halloween Robin (M) is a close magic attacker (range = 1). Therefore, when not accounting for the Weapon Triangle, the amount of damage he deals will be equivalent to his Atk minus the foe's Res stat.

Can Save Allies From Harm With A/R Near Save 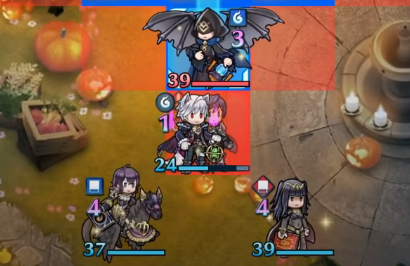 Robin saves Chrom from getting attacked by this Blue Manakete.

The【Savior】buff that A/R Near Save gives is very powerful, allowing Halloween Robin (M) to take the place of his ally that is being attacked by a melee enemy unit.

This means that he protects his ally from taking any damage and could also potentially one-shot the enemy unit attacking. It gives him a +4 Atk/Res buff that easily stacks and synergizes with the bonuses from Moonstrike Breath and Sturdy Stance 3.

This also synergizes with his built in Slick Fighter 3 because it guarantees him a follow-up attack.

Halloween Robin's various buffs from both his weapon and Sturdy Stance 3 and the debuffs inflicted by Moonstrike Breath are shown here.

In addition to granting he Atk+6 to himself, inflicting Atk-6 to his target, Special acceleration, and adaptive damage against ranged foes, Moonstrike Breath grants a very powerful defensive effect that jives well with the rest of Robin's kit.

As long as he is within 2 spaces of an ally and he lands a hit with his special, he restores 30% of his health back.

Combined with the low-cooldown Noontime that also heals Robin, he makes for a very durable unit.

Because of Moonstrike Breath, Noontime and the rest of his kit, Robin can take lots of attacks without going down.

Assess enemy danger zones and try leaving him in zones which are not lethal for him. Rapid heals from his kit will make sure he soaks up the damage well.

Not only does this skill make him more powerful in the enemy phase, but it also punishes attackers by interfering with their special cooldowns.

This is very important when up against powerful foes as in those situations, having a special activated means one of your units getting taken out.

It also has clear synergy with his A/R Near Save 3.

No Distant Counter and Armor Unit

As an armored unit, Robin is restricted by his movement, but this could be remedied if paired with a team using Armor March 3.

Alternatively, you can always give him the Armored Boots Sacred Seal.

Without Distant Counter built into his kit, he has no way to retaliate against enemy units who can just chip away at his HP by kiting him.

If his A skill is replaced with Distant Counter, he will be losing some of the bonus bulk and bite from Sturdy Stance 3, along with taking the full brunt of an enemy's attack if they carry buffs.

Halloween Robin (M) takes 1.5x damage from dragon-effective weapons like Falchion or Naga, and one blow from these types of weapons is sure to take her down. Make sure you know what weapons you are up against before hopping too far into the line of battle!

Halloween Robin (M) takes 1.5x damage from armor-effective weapons like Armorslayer+ or Hammer+, and one blow from these types of weapons is sure to take him down.

Make sure you know what weapons you are up against before hopping too far into the line of battle!

Robin - Fall Reincarnation Only Appears as a 5 Star Hero!

Most of Halloween Robin (M)'s skills have inheritance value!

Halloween Robin (M)'s skills are good for a wide variety of armored units.

How to Get Halloween Robin (M) / Illustrations / Voice Actor / Quotes

How to Get Halloween Robin (M)

Halloween Robin (M) is a limited time Hero who can be pulled from a Special Heroes Summoning Event. They do not appear in regular summons.

Register as a member and get all the information you want. (It's free!)
Login
Opinions about an article or post go here.
Opinions about an article or post
We at Game8 thank you for your support.
In order for us to make the best articles possible, share your corrections, opinions, and thoughts about "Halloween Robin (M) Builds and Best IVs" with us!
When reporting a problem, please be as specific as possible in providing details such as what conditions the problem occurred under and what kind of effects it had.