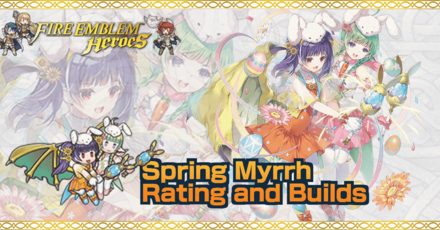 This is a ranking page for the hero Myrrh - Spring Harmony from the game Fire Emblem Heroes (FEH). Read on to learn the best IVs (Individual Values), best builds (Inherit Skill), weapon refinement, stats at Lv 40, and more for Spring Myrrh.

We recommend a +Atk IV when merging Spring Myrrh to 10. This is for the same reasons as above! She will be extremely bulky at this point, so improving her offenses with a +Atk IV is perfect for her.

The only thing added to her kit is a standard Reposition skill and a Mirror Stance 2 Sacred Seal. You can use any Stance Sacred Seal, but Mirror Stance is looking to be a great option as it provides her with both offense and it balances her Res with her Def stat. Balanced defensive stats are ideal for survival!

Spring Myrrh is a close magic attacker (range = 1). Therefore, when not accounting for the Weapon Triangle, the amount of damage she deals will be equivalent to her Atk minus the foe's Res stat.

Spring Myrrh is one under the category of harmonized heroes. They have access to a unique harmonized skill which is very similar to duo skills. You can activate harmonized skills by pressing the the harmonized skill button. Because this harmonized unit features both Myrrh and Nah, they can qualify for bonus scores in all of the games where these two show up!

Harmonic Myrrh's Harmonized Skill provides both bulk and bite for 1 turn. It grants +4 Atk/Spd, immunity to flying-effective damage, and blocks enemies' follow-up attacks. Even though this is designed for Resonant Battles, it can still be very powerful in any map.

It has great synergy with Spring Myrrh's kit which is dual-phase oriented. 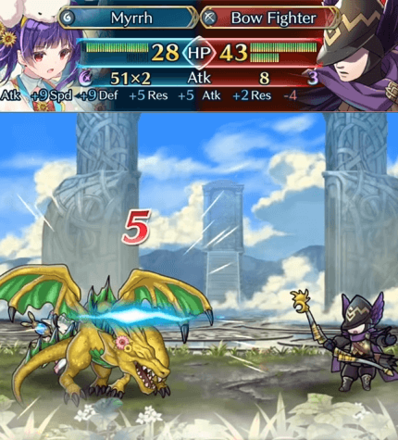 The calculated damage is 8, but Myrrh and Nah only took 5 damage because of the damage reduction effect.

When attacked in the enemy phase, Lilac-Jade Breath grants Spring Myrrh +5 Atk/Spd/Def/Res, and 40% damage reduction. This effect can also be harnessed in the player phase if foe's HP = 100% at the start of combat, so prioritize your targets to make the most out of Harmonic Myrrh's abilities.

Additionally, it grants adaptive damage when up against a ranged foe.

Last, but not the least, Lilac-Jade Breath accelerates Spring Myrrh's Special trigger. So expect Noontime to dish out a lot of heals.

The real value of this skill is its synergy with Harmonic Myrrh's kit! She is already a very solid enemy phase unit because of Lilac-Jade Breath, Distant Counter and Noontime, but this skill puts the nail in the coffin. Have confidence that even a base kit Spring Myrrh will perform very well as an enemy phase unit.

This skill makes Distant Counter a valuable choice in the A slot.

Atk/Res inflicted onto a wide area

Spring Myrrh's C skill, Atk/Res Rein 3 inflicts -4 Atk/Res on foes within 2 spaces during combat. It helps both Spring Myrrh and allies as the range is modest and it affects enemies even if Myrrh is not directly part of combat. Myrrh's flying movement makes it easy to position her in effectively utilizing this skill. It is an in-combat buff which makes it easy to stack with other debuffs such as the Atk Ploy 3 Sacred Seal.

Spring Myrrh's weapon has no Distant Counter built into it, and that means Myrrh needs to have the skill in her A slot. This denies her access from very powerful skills as the A slot is one of the most valuable slots in the game.

Lilac-Jade Breath grants Spring Myrrh adaptive damage, so in some cases, the Res debuff from Atk/Res Rein 3 will be invalidated. Though this does not mean the skill will be outright useless as the -4 Atk debuff will always be active regardless.

As a flying unit, Spring Myrrh takes 1.5x damage from bows and weapons effective on flying units. Be sure to keep them out of the range of archers and leave them to other units.

Spring Myrrh shines as an enemy phase unit but does very poorly on player phase as her Dragon's Ire skill will not be active.

This means if you encounter her in Arena or Aether Raids, you can put either a tanky unit like Brave Edelgard or Brave Hector in her way and force her to attack them.

This lowers her effectiveness as a unit and will mostly likely end up being doubled due to her poor Spd stat.

Furthermore, once she attacks, her Lilac-Jade Breath will be inactive as her foe has already taken damage. This means that her power goes down further as she won't be granted those weapon buffs.

Spring Myrrh also takes 1.5x damage from dragon-effective weapons like Falchion or Naga, and one blow from these types of weapons is sure to take him/her down. Make sure you know what weapons you are up against before hopping too far into the line of battle!

As a flying unit, Spring Myrrh can earn buffs from Hone Fliers or Goad Fliers, increasing her firepower.

She can also make use of skills such as Air Orders 3 or Flier Formation 3.

Spring Myrrh can also take advantage of being in an all-dragon team, receiving buffs from Hone Dragons or Goad Dragons.

As a dragon, Spring Myrrh is weak to weapons that are effective against dragons.

Brave Edelgard can reduce Spring Myrrh's damage by 80% if Spring Myrrh attacks her, as well as debuffing her with her weapon.

Legendary Edelgard can prevent Spring Myrrh from counterattacking due to her weapon and has a guaranteed follow up with her skill Raging Storm.

Brave Hector, meanwhile, has his own sheer bulk that Spring Myrrh will have to get through, not to mention his weapon refine that not only debuffs her, but also prevents her from making follow up attacks.

Myrrh - Spring Harmony Only Appears as a 5 Star Hero!

Spring Myrrh as a Source Hero

Spring Myrrh can be used to inherit Distant Counter and another skill of choice between Dragon's Ire 3 or Atk/Res Rein 3. However, Spring Myrrh is a very versatile special harmonized hero that can provide lots of utility and firepower for your lineups. Please think carefully before fodderring her off.

How to Get Spring Myrrh / Illustrations / Voice Actor / Quotes

How to Get Spring Myrrh

Spring Myrrh is a limited time Hero who can be pulled from a Special Heroes Summoning Event. They do not appear in regular summons.

Register as a member and get all the information you want. (It's free!)
Login
Opinions about an article or post go here.
Opinions about an article or post
We at Game8 thank you for your support.
In order for us to make the best articles possible, share your corrections, opinions, and thoughts about "Spring Myrrh Builds and Best IVs" with us!
When reporting a problem, please be as specific as possible in providing details such as what conditions the problem occurred under and what kind of effects it had.