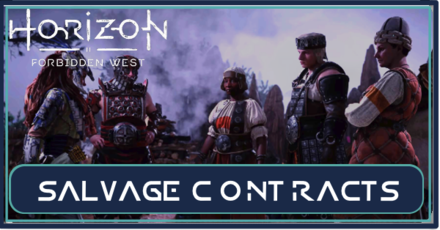 Salvage Contracts are a type of fetch quest where Aloy must collect resources in Horizon Forbidden West (HFW). Learn which camp you can find each Salvage Contractor, the legendary armor reward and trophy for completing all Salvage Contracts, and all associated Quests.

Sometimes a Salvage Contractor will not give all of their Quests at once, so you'll need to return to them after you complete a set of Salvage Contracts to see if there are more to complete.

The Salvage Contract in The Raintrace may not appear automatically even if you get close to it. You'll need to defeat a group of Stalkers attracking the Salvage Contractor's group before the icon will appear on the map. It can be found down and to the left of a nearby Black Box. 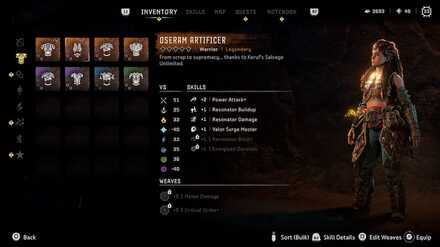 The Legendary Warrior Armor Oseram Artificer is obtained by complete all 17 Salvage Contracts. After completing all of them, finish the overarching Quest, Keruf's Salvage Unlimited, consisting of just a final cutscene, to obtain the Armor.

How to Complete Salvage Contracts Fast

Finish all Salvage Contracts Before Returning

You'll need to jump between different locations when completing Salvage Contracts, even moreso than other Quests. While normally using campfires to fast travel for free is a good option, you can save lots of time by stocking up on 10-20 Fast Travel Packs ahead of time fast traveling between objectives with them.

Post (0 Comments)
Opinions about an article or post go here.
Opinions about an article or post
We at Game8 thank you for your support.
In order for us to make the best articles possible, share your corrections, opinions, and thoughts about "All Salvage Contracts Camp Locations, Rewards, and Quests" with us!
When reporting a problem, please be as specific as possible in providing details such as what conditions the problem occurred under and what kind of effects it had.