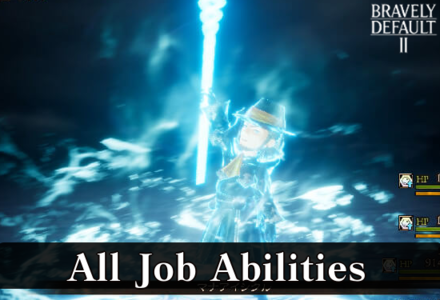 This is a list of all Abilities in Bravely Default 2 (Bravely Default II) for the Nintendo Switch. Read on to see all the list of abilities, which class owns them, and which level is needed to learn each ability.

Abilities are usable moves for each Jobs

Abilities in Bravely Default 2 are skills that are provided to each Job. To learn abilities, you simply have to level that Job to learn more abilities from the same Job.

Since these abilities are assigned to that class, you won't be able to use them once you change class unless you equip that job as a Sub-Job.

Abilities are separated into Command and Support types

Use Command Abilities in battle

There are two types of abilities you can learn. These are Command abilities and Support abilities. Command abilities are those you can use in the middle of the fight. They usually costs some resouce like HP, MP, or even BP and they can unleash their effects to defeat foes or aid allies.

Support Abilities are abilities that provides a passive buff to your character at the expense of consuming a slot to your character's passive slot skills. The effects of Support abilities vary from revealing the chest numbers in dungeons to downright improving your battle capabilities.

Sub-Jobs can be equipped to use other abilities

As mentioned above, you won't be able to use Command Abilities from a Job if you change your current Job to a different one. However, by setting it as your Sub-Job, you'll still be able to access that Job's command abilities like you were still equipping it.

The downside is you don't get the stats of that Job so equipping a Vanguard as a sub-Job into a White Mage may make those skills deal less damage due to the lower strength stat of the White Mage.

In order for us to make the best articles possible, share your corrections, opinions, and thoughts about 「List of Abilities | Bravely Default 2 (Bravely Default II)」 with us!