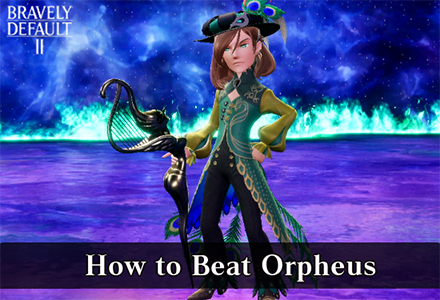 This is a guide to Orpheus, a Boss battle in Bravely Default 2 (Bravely Default 2). Read on to know how to beat Orpheus, its strengths and weaknesses, and the best strategy against Orpheus.

The standard Job setup. Two characters should have access to both black and white magic to recover damage dealt/ deal AOE damage.

These are the primary abilities you'll want to have or use against Orpheus. You'll want to start the fight with your black mage casting poison on Orpheus to get the damage going during the whole fight.

You'll then want to dispatch Orpheus' allies one by one (casting black magic AOE isn't recommended as the damage reduction from the buffs is massive).

Use high damaging single target moves like Cross Cut or Flying Heel Drop against enemies that aren't defaulting and use Qigong Wave against those that do Default.

For equipment, there isn't really much you need to have for Orpheus aside from a Clothespin (or two if you plan to have someone be a Black Mage or Black Magic as a Sub-Job).

It is highly recommended due to Orpheus's revenge move against black magic, with Clothespin, feel free to fire away!

Phase 1: Orpheus and his Allies 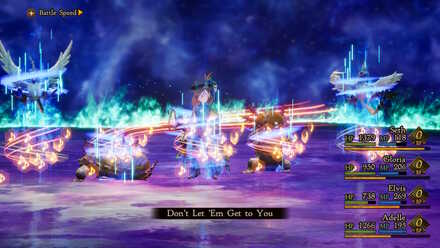 At the start of the fight, Orpheus will be buffing all of his allies which will make them tough as rock. You'll want to rely on your Monk to dish out damage at this point so use HP moves like the Heel Drop or Qigong Wave to dispatch the enemies one by one. You should also make your Black Mage focus on inflicting poison to Orpheus (it will deal roughly 500 damage per turn). You should set your white mage to focus on healing the self damage that your monk deals to him/herself too.

Once Orpheus is alone, he'll change his strategy to focus on defaulting and unleashing waves of aoe attacks and single target wind attacks. Make sure to watch his BP and default when it reaches 3 or a possible party wipe can even happen. If you have successfully poisoned Orpheus at the start of the fight, just play defensively and have your Vanguard continue on using Treat at your white mage while the white mage continues on healing everyone.

In order for us to make the best articles possible, share your corrections, opinions, and thoughts about 「How to Beat Orpheus | Bravely Default 2 (Bravely Default II)」 with us!