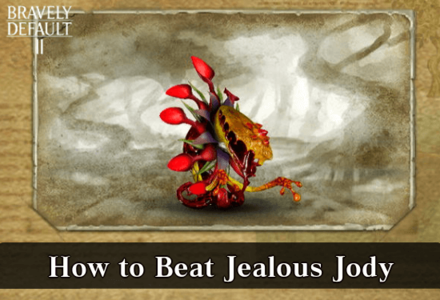 How to Beat Jealous Jody

Jealous Jody isn't a strong enemy. However, it focuses on using multiple targeted attacks and the amount of damage it deals to the team simply can't be ignored.

Assigning a character for reducing its attacks and another for increasing your defense while slowly whittling it can ensure an easy boss fight.

If you don't prefer to use the debuff method, buffing your own party will also work against Jealous Jody's attacks. Or you can do both if one method doesn't suffice.

However, we highly suggest using the Pictomancer since it can use Chiaro, a light elemental attack which Jealous Jody is weak at.

Register as a member and get all the information you want. (It's free!)
Login
Opinions about an article or post go here.
Opinions about an article or post
We at Game8 thank you for your support.
In order for us to make the best articles possible, share your corrections, opinions, and thoughts about "How to Beat Jealous Jody" with us!
When reporting a problem, please be as specific as possible in providing details such as what conditions the problem occurred under and what kind of effects it had.