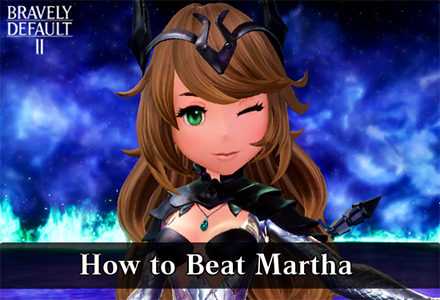 This is a guide to Martha, a Boss battle in Bravely Default 2 (Bravely Default II). Read on to know how to beat Martha, its strengths and weaknesses, and the best strategy against Martha.

Martha can deal AOE damage via Sonic Thrust. Despite the name, it's actually a sweep attack that will hit your whole party for a decent amount of damage.

After the first cutscene, Martha will start using Spirit Surge which will drain the target's HP and MP. This is also used as a counter attack to all damaging abilities.

Once you reach this phase, it is vital to follow all the steps below. 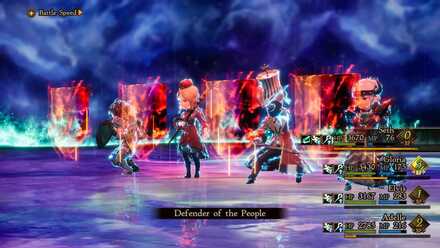 Martha can counterattack literally any damaging move you use against her with Spirit Surge which can rapidly deplete your MP. There are two ways to do prevent this which are:

MP is the most crucial resource in this fight which is why the Shieldmaster's Defender of the People strategy is highly recommend. You should also use Treat to characters that gets their MP stolen from them (or Ethers if you have a lot of them).

Using the Beastmaster's Off the Leash can allow you to attack Martha without triggering her counter. Monsters with dark or fire damage can deal great damage and allow you to avoid taking damage. Aside from the Gambler's ablity to refill everyone's MP to full via the Jackpot Special ability, the Gambler can also attack Martha without using MP. Other classes that use BP like the Freelancer or those that use HP based skills like the Monk are also great choices for the fight.

Register as a member and get all the information you want. (It's free!)
Login
Opinions about an article or post go here.
Opinions about an article or post
We at Game8 thank you for your support.
In order for us to make the best articles possible, share your corrections, opinions, and thoughts about "How to Beat Martha" with us!
When reporting a problem, please be as specific as possible in providing details such as what conditions the problem occurred under and what kind of effects it had.