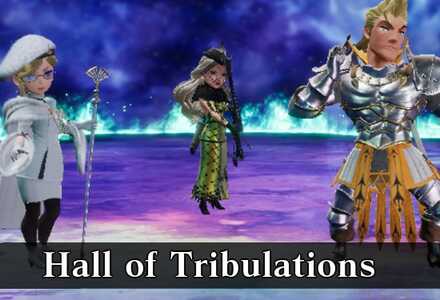 How to Unlock the Halls of Tribulation 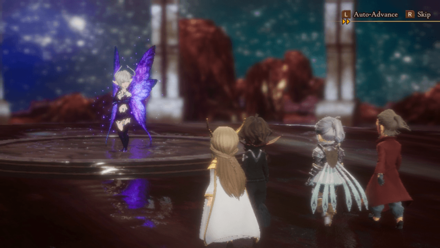 This will be an incredibly tough fight. Since this is the last portal you'll be able to complete, we highly suggest completing all the other tribulation trials first to gain access to the other Job's strongest abilities. Take note that Lady Emma can absorb any magic attacks and Lonsdale can reflect all physical damage!

How to Beat Hall of Tribulation I

Bernard will repeatedly use Steal MP against your party while Anihal and Orpheus provides debuffs and buffs to your team and their team respectively. High damage output is recommended for this fight since all enemies have low HP (around 60,000-90,000). Beat them quickly before they can stack up those buffs and before they whittle down your party's MP pool!

How to Beat Hall of Tribulation II

A healer that can deal massive damage and several status ailments, a tank that will automatically block damage directed at its allies, and an extremely hard hitter that will attack you for attacking its defended ally. The biggest tip is to paralyze Galahad to make the other two allies vulnerable! (or paralyze them all to make the battle easier).

How to Beat Hall of Tribulation III

An easy battle were it not for Martha's strong attacks and abilities that can delay turns. The other two enemies can easily be countered by elemental gears. Take down Helio first to reduce their healing then knock Martha out to secure your victory!

How to Beat Hall of Tribulation IV

Despite what you may remember, it will actually be Vigintio and Folie that will give you trouble in this fight rather than Prince Castor. Prince Castor will repeatedly attack the party using Indiscriminate Strike to hit all your party members while Vigintio will keep on using Apocalypse and Meltdown. Folie will be the annoying character and will keep on using Instant Death moves and Daub on your party members.

How to Beat Hall of Tribulation V

This party is built with strong single target damage and the ability to pierce through defenses. This is a battle that will see how strong your party's tanker class is!

How to Beat Hall of Tribulation VI

You'll be fighting Selene, Dag, Roddy, and Lily. It's a completely balanced party with a tank, healer, damager, and a magic damage dealer. Prepare yourself and your party for a long fight!

How to Beat Hall of Tribulation VII

In order for us to make the best articles possible, share your corrections, opinions, and thoughts about 「Hall of Tribulation Portal Locations | Bravely Default 2 (Bravely Default II)」 with us!