How to Play the Berserker

The Berserker can use the Level Slash and Crescent Moon ability which can hit whole groups of enemies for the measly cost of a few HP or BP. A great power leveling class!

The Berserker's ability can make killing Wiki-wikis easier. The consequence is you'll take a percentage of the damage you deal from attacks but if you're looking to slay these birds, it is a small price to pay.

The Thief's Mug Ability can be comboed with the Berserker's ability to attack all targets. Quick battles and more items gained!

The Berserker is one of the slowest class in the game and it also suffers from low durability. This is the reason why it is highly preferred to use the Berserker as a Sub-Job.

A quick and easy way to wipe out enemies without spending BP.

The ability that truly unlocks the Berserker Class. If Free-for-All is equipped, the character will start using offensive abilities on his/her arsenal for free. Amped damage and 0 resource cost??

The ability to attack all enemies is very valuable. It can also be comboed with the Thief's mug ability to powerfarm items from enemies!

Speciality 2 Can only be learned after leveling the Berserker to Level 12.

How to Unlock the Berserker Job

For a surprising twist of events, Prince Castor is the one who bears the Berserker Asterisk. Defeat Savalon's prince to earn the highly prized Berserker job!

How to Beat Prince Castor 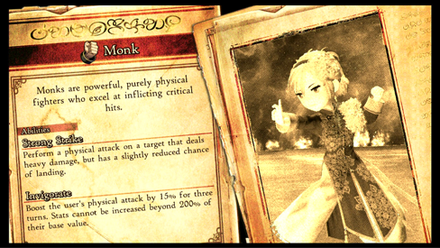 The Monk class is a great sub-Job for the Berserker when post game comes. Its Death's Door + Phoenix Flight combo is extremely strong since Death's Door's damage ratio is relative to how low your current HP is.

In order for us to make the best articles possible, share your corrections, opinions, and thoughts about 「Berserker Job Abilities and Best Sub-Jobs | Bravely Default 2 (Bravely Default II)」 with us!