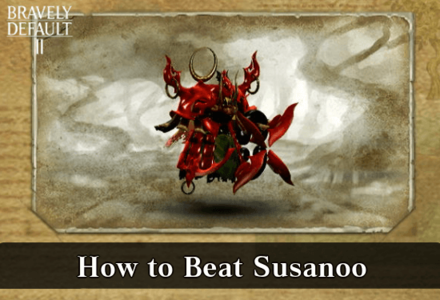 This is a guide to Susanoo, a Rare Enemy battle in Bravely Default 2 (Bravely Default II). Read on to know how to beat Susanoo, its strengths and weaknesses, and the best strategy against Susanoo.

How to Beat Susanoo

The Safety Ring which can be purchased in Rimedhal is a great accessory to equip against Susanoo. It will negate Doom and Instant Death which Susanoo's biggest threats.

Thanatophobia is an Instant Death Move

Thanatophobia will instantly kill a target that gets inflicted with Dread. Since it's an instant death move, it will also be countered by Safety Ring.

There's no need to cure Dread unless you want to Brave against Susanoo.

Use Reraise if you don't have Death Resist Gear 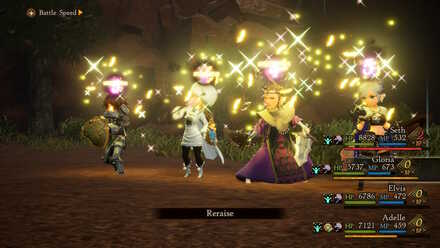 Reraise is a great counter against Susanoo's Baleful Bellow and other instant death moves. Having a maxed out White Mage can allow you to use Reraise on all party members instantly.

Since Susanoo is an undead, you can use the Red Mage's Healaga against him to quickly burst him down.

Register as a member and get all the information you want. (It's free!)
Login
Opinions about an article or post go here.
Opinions about an article or post
We at Game8 thank you for your support.
In order for us to make the best articles possible, share your corrections, opinions, and thoughts about "How to Beat Susanoo" with us!
When reporting a problem, please be as specific as possible in providing details such as what conditions the problem occurred under and what kind of effects it had.