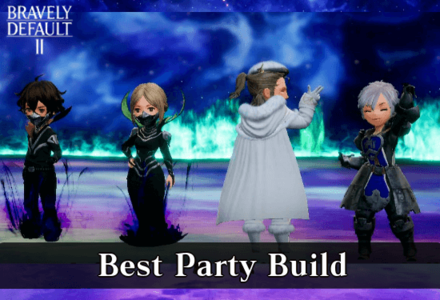 Welcome to our guide for the best party for every chapter in Bravely Default 2 for the Nintendo Switch. Check here to learn which Jobs will make each section of your adventure easier in the land of Excillent!

There Are No Stat Differences Between the Characters

It should be known that there doesn't seem to be any apparent differences when it comes to each character's stats. This allows you to rest assured that you can assign any class to any member without any drawbacks.

Beastmaster Is One of the Strongest Jobs

Beastmaster's capture mechanic allows it to become a force to be reckoned with as time passes and as you collect more creatures. The more captures you have, the more variety this Job will have in its arsenal of skills.

Maximize Freelancer During the Prologue

By farming Exp for the Freelancer Job, you can work towards unlocking two very useful abilities: JP Up and JP Up and Up. These abilities add a multiplier to JP gained from battles.

With Sloan accompanying your party for most of the prologue, it is an easy chance to grind up levels as he will be there to help your team out with difficult battles.

First Half of Chapter 1

Now that a few more classes have been made available, we recommend this loadout as an all-around solid team.

Second Half of Chapter 1

Taking the opponent's monsters to fight for your side is an unparalleled source of damage in the earlier chapters. This, partnered with utility offered by the Bard class can help against difficult boss battles.

First Half of Chapter 2

After receiving Thief from the end of Chapter 1, we recommend equipping it right away. Godspeed Strike is a high-damage ability that can deal large amounts of single-target damage. Berserk's access to Crescent Moon and Level Slash is extremely useful for clearing out multiple enemies.

Second Half of Chapter 2

The recovery provided by the Red Mage's Healara and Healaga is phenomenal during Chapter 2. Combined with the healing prowess of a White Mage, it rounds out the Healer role very well.

First Half of Chapter 3

Starting with Chapter 3, enemies will start to hurt more and more. Having a tank in the form of your Shield Master is highly recommended. Devote this role to protecting your damage dealing allies.

Second Half of Chapter 3

If you get the Dragoon Job at the beginning of Chapter 3, we recommend using it in tandem with the Thief's abilities. Dragoons have naturally high attack and speed which can work in the favor of Thieves. This allows Godspeed Strike to deal even more damage.

When Spirit Master is unlocked, we recommend pairing it with the White Mage. It's abilities at Level 4 and Level 6 help maintain the team's overall health. At Level 7, you can also regenerate MP which makes heavy spell use less of an issue.

First Half of Chapter 4

Vanguard's Specialty Attention Seeker gives it a boost to its Physical Attack and Crit Chance based on the user's chance of being targeted. This allows you to gain an overwhelming amount of physical power compared to other Jobs.

Second Half of Chapter 4 and Chapter 5

After getting the Phantom Job at Savalon Royal Palace, we recommend using it as your primary Job for your attackers. Partnered with Thief, this allows you to deal destructive amounts of damage with Godspeed Strike in tandem with the buffs from Become Lightning.

In order for us to make the best articles possible, share your corrections, opinions, and thoughts about 「Best Party Build for Each Story Chapter | Bravely Default 2 (Bravely Default II)」 with us!