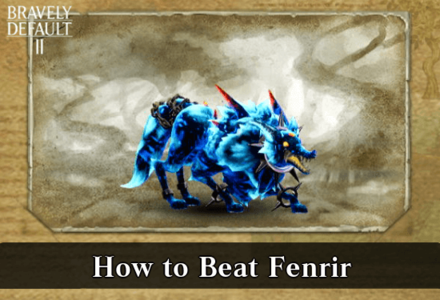 This is a guide to Fenrir, a Boss battle in Bravely Default 2 (Bravely Default 2). Read on to know how to beat Fenrir, its strengths and weaknesses, and the best strategy against Fenrir.

How to Beat Fenrir

No recommended equipment for this battle. Just equip your highest damaging gear and highest defensive gear.

Fenrir has a moderate amount of HP for a low level enemy. Not only does it have a massive 3000 HP but your damage against it will be almost non-existent.

Leave the fighting to Sir Sloan and just keep your HP up. Having characters in critical HP will force Sir Sloan to heal you. Be sure to avoid that at all costs!

Register as a member and get all the information you want. (It's free!)
Login
Opinions about an article or post go here.
Opinions about an article or post
We at Game8 thank you for your support.
In order for us to make the best articles possible, share your corrections, opinions, and thoughts about "How to Beat Fenrir" with us!
When reporting a problem, please be as specific as possible in providing details such as what conditions the problem occurred under and what kind of effects it had.