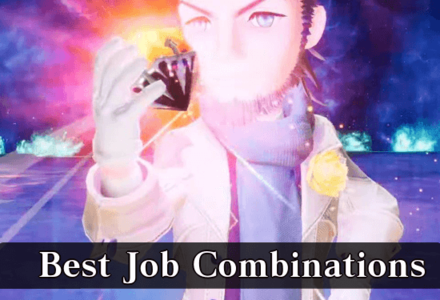 Learn all the best Job Combos in Bravely Default 2 (Braveley Default II)! Here we list all the possible combinations you can make with all the Jobs available in the game and the best abilities to equip to them.

Compound and Inflict Ailments to Enemies!

With the Phantom's 2nd Speciality, all ailments gets a 100% chance of getting inflicted to enemies. This comes with a measly cost of 40 MP but being able to paralyze the strongest bosses makes that 40 MP spent extremely worth it. It can also be a guaranteed way to poison or inflict contagion on them which combos with the Phantom's Milk Poison and Sick Twist.

Similar to the Phantom-Salve Maker combo, this Job's aim is to continiously inflict an ailment to the enemy. Most end-game bosses are vulnerable to paralysis which makes the Ranger one of the best Sub-Job for the Phantom to guarantee your paralysis' effect.

Give Me Your Magic Stat

The Oracle can copy its sub-Job's stat using its 2nd Speciality. This is a flat damage stat boost for the Oracle by taking the Arcanist's magic stat then amplifying Triplara's damage. This setup also allows you to use AOE Darkga without hitting yourself in the process (but it will deal less damage due to not getting access to the Arcanist's speciality 1).

The Arcanist's high magic stat makes it one of the strongest spell slinger in the game. Unfortunately, it can also hit allies with its attacks which makes it an unideal character to include in a normal party. With a Bastion as its Sub-Job, you'll be able to prevent friendly fire using Vallation!

The Gambler's level 12 ability “Dealer's Choice” is a move that can cause random effects. It can even raise your PG, EXP, and JP after the battle but it can also cause your gambler to instantly die or cause your whole party's HP to be reduced to 1. With Sanctuary, all of these damages will be negated so you can safely try to gamble for those extra EXP and JP!

Hit them not us!

The Shield Master's ability to protect allies isn't just for single target attacks but also for group target moves! If your allies are in Critical HP, the Shield Master will block all the spells that gets fired towards the team as well.

The Shield Master's super tanky nature is further amplified by the Hellblade's passive HP and MP Regeneration. This makes the Shield Master unkillable. This also gives the Shield master the ability to damage enemies via Minus Strike and Ultima Blade (with HP/MP Converter ability).

Perhaps, the best healer combo in the game, the White Mage and Spirit master combo allows your White Mage to AOE cast Reraise on all your party members. This is a crucial combo for many boss fights that can save your team from the brink of defeat. Just don't use Purebringer to remove your Reraise and Regeneration buffs!

The Sword Master's speciality 2 “Double Duty” will allow your Sword Master to use the Vanguard's “Attention Seeker” Speciality that gives your character a massive damage boost equivalent to your target chance. Together with the Swordmaster's Divide attention ability, you can easily reach max attack as soon as you reach Level 12 on the Sword Master and have a tank with high target chance on your team!

Another combo this build can abuse is the firebird and Ruby Blades combo to deal massive fire damage to the enemy by lowering their resistance to flames.

While this is not the most efficient Job combo, it is definitely a fun one. The Gambler's High Roller move is a 10,000 PG cost move that can deal massive damage to the enemy the stronger your physical attack is. Thanks to Berserk and the Berserker's high damage stat plus Free-for-All's free ability costs, you can easily dish out thousands of damage with this combo for free. However, This won't work with Rage and Reason and your Flash the Cash will not deal damage due to being free.

Thanks to the Vanguard's high damage stat via “Attention Seeker”, the Hellblade's elemental blades will deal a ton of damage. Just make sure to have Sub-Job Speciality 1 to replenish your HP!

The Dragoon is one of the classes that possess high speed stat along with Thief, Phantom, and the last hidden class. With the Dragoon's ability to dual wield equipment without the Phantom's support ability, you'll be able to hit like a truck pretty early in the game. Not to mention that Spirit Surge is a better HP/MP absorption tool.

These Job Combinations are a list for the last section of the game. All abilities are included and the hidden class Bravebearer will also be considered in the Job combinations. 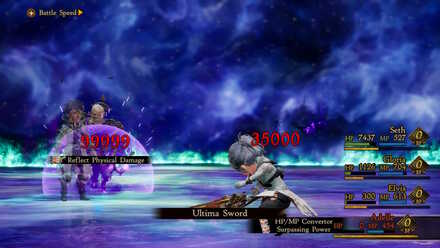 The HP/MP Converter will turn all MP costs into HP and vice versa, with the Ultima Blade's damage being reliant on the spent resource, you'll be able to spend more resources than the maximum MP allows. This combo can easily deal 99,999 damage at the expense of the character's life.

Add elemental damage to their attacks!

Elemental Supplement is a move that's normally used on your physical attackers to exploit enemy elemental vulnerabilities. However, you can also use this on enemies to make them hit you with the respective element instead. By having 2/3 resistant to the element you used, you'll be able to absorb all the attacks they do! With Across the Board, you'll now be able to use this against groups of enemies which can make many battles trivial.

Similar to the previous Sword Master and Vanguard combo except this time, the Sword Master gains access to Ninefold Flurry. It's similar to fourfold flurry but this time, it hits 9 times and with high physical attack, you'll be able to dish out massive damage in a few turns.

This combo again, relies on the Sword Master's ability to use its Sub-Job's speciality. With the Spirit Master's permanent 5 spirits, your party will never run out of anything. Infinite healing, infinite MP, infinite status ailment cure, infinite buff and debuff cure, and infinite ressurection. All for free and you still retain a strong physical attacker.

The Phantom's guaranteed hit together with the Beastmaster's Muzzle and Muzzling Maelstrom combo is a strong 4 hit strike. Use this against lone enemies to deal strong damage!

The Freelancer's ability to use Mimic can allow you to use Highroller for free. A fun combo similar to the Berserker and Gambler combo but it is way more reliable and stronger the more Jobs you master.

Call an ambulance, But not for me!

The Monk's Phoenix Flight partnered by the Berserker's Death's Door is a strong 2 Hit combo that will instantly consume all your HP then deal massive damage to the enemies. With Vent Fury and Comeback Kid, you'll also be able to replenish all resources spent then use it all again!

In order for us to make the best articles possible, share your corrections, opinions, and thoughts about 「Best Job Combos | Bravely Default 2 (Bravely Default II)」 with us!