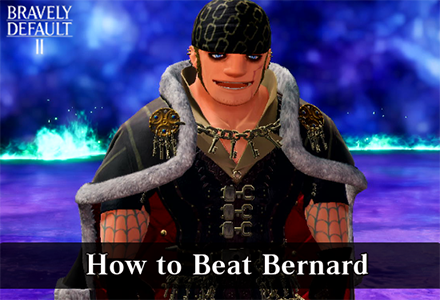 This is a guide to Bernard, a Boss battle in Bravely Default 2 (Bravely Default II). Read on to know how to beat Bernard, its strengths and weaknesses, and the best strategy against Bernard. 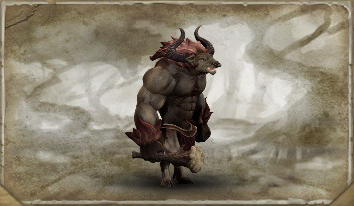 Bernard is weak to axes and the Minotaur you can capture in the area unleashes a strong Axe attack. If you're using a Beastmaster, capturing several Minotaur and using it against Bernard can quickly end the fight.

Eliminate his guards and poison him

Bernard's lackeys aren't the strongest bunch. Around 1000 HP so they should easily fall with a few hits. While doing so, try to poison Bernard to get some huge damage down the fight.

Focus on Strong Attacks Only

Don't waste your time using normal attacks or other moves. The longer the fight goes on, the more value Bernard can get from Steal Breath, only use your strongest moves to end the fight quickly.

If you don't focus on damage, Bernard will be able to outsustain your party's attacks with his Steal Breath.

Buff the Party Using (Won't) Be Missing You

The Bard's ability, (Won't) Be Missing You, is a vital buff in this fight. Bernard's evasion is quite high so raising your accuracy via buffs is a completely viable choice.

Focusing on using spells may cause your MP to run out and leave your mages as sitting ducks against Bernard's assault.

Bernard's Steal Breath's recovery is based on the damage he deals with it. Whenever Bernard's about to Brave (easily predictable if his BP is 3), use your Vanguard's Enrage to make all his attack focus your tankiest members and make him recover less HP.

In order for us to make the best articles possible, share your corrections, opinions, and thoughts about 「How to Beat Bernard | Bravely Default 2 (Bravely Default II)」 with us!