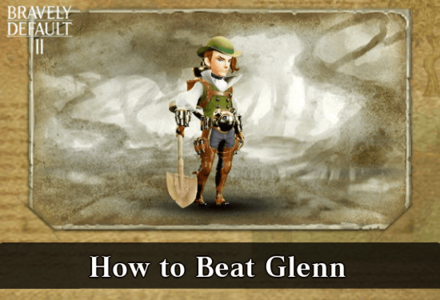 This is a guide to Glenn, a Quest Boss battle in Bravely Default 2 (Bravely Default II). Read on to know how to beat Glenn, his strengths and weaknesses, and the best strategy against Glenn.

Purchase Lockets from the merchant in the dream to prevent Glenn from charming your team.

Make use of Beastmaster's Off the Leash!

Using powerful magic attacks with the Beastmaster's Off the Leash ability can allow you to attack Glenn without triggering his offensive magic counter. Using the powerful lightning attacks from Thor are particularly effective, so we recommend stocking up on them before heading into this battle.

A max level White Mage can use Basuna on your whole party. Immediately remove Contagion when it affects you so you don't lose your fire power against Glenn!

Unless you have the Berserker's Unshaekable Will ability, don't use Brave and offensive physical abilities against him. His counter attack rate is high and chances are he'll charm your attacker, causing all those braved moves to be launched at your party members instead.

In order for us to make the best articles possible, share your corrections, opinions, and thoughts about 「How to Beat Glenn | Bravely Default 2 (Bravely Default II)」 with us!