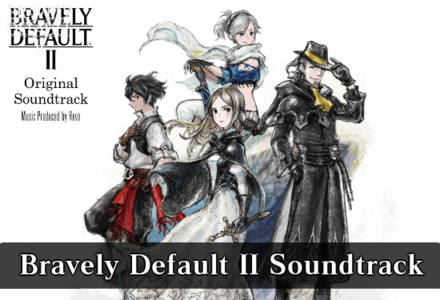 The Bravely series has been lauded for its memorable and impeccable soundtrack. Read on to learn more about information relating to Bravely Default 2's Soundtrack and the Limited Edition Soundtrack on the Nintendo Switch.

On March 3, 2021, a few days after the game's release, the Bravely Default II Original Soundtrack was released for sale. Musical artist Revo, also known as Yasuo Kamanaka, returns to once again write, arrange, and produce the music for this game in the Bravely series. He is also joined by Yuuka Ueno to provide the vocals for some of the tracks.

The Regular Edition OST is also available to stream on Spotify.

Differences with the Limited Edition

Alongside the Original Soundtrack, a Limited Edition version was also released which comes with a 4th disc with an additional 14 tracks. This 4th disc runs for an extra 64 minutes and 17 seconds bringing the total length of play duration to 4:33:44.

The Limited Edition also comes with special inserts of the main characters wearing the outfits of the different Asterisk Holders while standing in front of colored glass that resembles the Crystal's Blessings.

All The Latest News

Register as a member and get all the information you want. (It's free!)
Login
Opinions about an article or post go here.
Opinions about an article or post
We at Game8 thank you for your support.
In order for us to make the best articles possible, share your corrections, opinions, and thoughts about "Bravely Default 2 Soundtrack" with us!
When reporting a problem, please be as specific as possible in providing details such as what conditions the problem occurred under and what kind of effects it had.