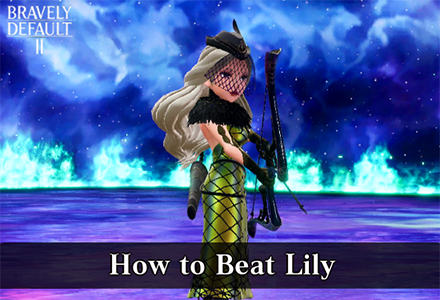 This is a guide to Lily, a Boss battle in Bravely Default 2 (Bravely Default II). Read on to know how to beat Lily, her strengths and weaknesses, and the best strategy against Lily.

How to Beat Lily 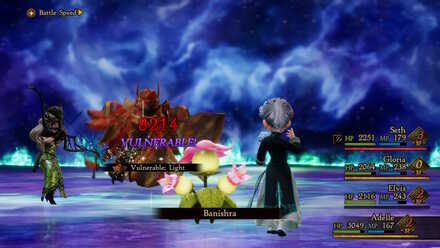 These little plants allow the Beastmaster to use Banishra. By using Off the Chain, you can deal up to 8000 damage to the Picto-Amrita!

Pay 2 Win with the Gambler Job!

Similar to the Roddy boss fight, you can use Flash the Cash against the Picto-Amrita to damage it without relying exclusively on physical attacks.

Lily can use Shadowbind to inflict paralysis on one of your party members.

If left alone, this can leave to an incapacitated member as Lily's Quickfire Flurry deals bonus damage to paralyzed targets.

Use the Bard's Don't Let `Em Hit You buff

Quickfire Flurry targets enemies at random and will always be a barrage of massive amount of hits. Make sure to buff everyone to survive the damage and follow it up with Curaga to recover.

Use the Vanguard's Neo Cross Slash to Damage Lily

Neo Cross Slash is a move exclusive to the Vanguard. It allows the player to wield a sword which is Lily's weakness and is a great move to use for damaging her. A single use can roughly deal 2000 damage.

In order for us to make the best articles possible, share your corrections, opinions, and thoughts about 「How to Beat Lily | Bravely Default 2 (Bravely Default II)」 with us!