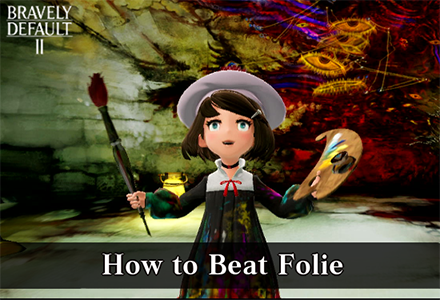 This is a guide to Folie, a Boss battle in Bravely Default 2 (Bravely Default II). Read on to know how to beat Folie, her strengths and weaknesses, and the best strategy against Folie.

Rock Tortoise is Vulnerable to Death

You'll want to reduce your enemies by 1 instantly when the fight starts. To do so, use a death move from the Beastmaster. Some of the easiest to get near Wiswald are the Pephredo, Paraponera, and Lop-Eared Ratbitt. It may take several tries to apply the death effect to the Rock Tortoise, so Brave several times to increase your chances of the effect taking hold.

To do this, we suggest going with the Berserker's Water Damage for this. It can also be followed by Blizzaga but it can get countered by Folie which is why it's not recommended.

Use Healara/Helaga or Undine for restoring HP

Folie will counter White Magic with Chiaro which can instantly kill a fragile team member.

It is vital in this battle to have at least one Red Mage dedicated to healing party members.

Berserker's Water Damage attack can be effective against Folie without triggering her counter to Black Magic. If paired with a powerful spear such as Longinus, the double vulnerability will deal massive damage. Having a Bard to strengthen your attackers power will also help to counter any debuffs applied by Folie.

Godspeed Strike is one of the strongest moves you have right now from the Thief. Use it against Folie to easily bring her down. A single use costs 95 MP but it's damage makes it more than worth it.

A good way to instantly replenish your Thief's MP is a well-timed Jackpot from the Gambler's special ability. Try to prepare it in advance before heading into the fight.

Alternatively, you can just use Ethers to restore your Thief/Healer's MP so if you don't wish to use the Gambler (we highly suggest it due to Flash the Cash's flat damage), it is completely doable.

In order for us to make the best articles possible, share your corrections, opinions, and thoughts about 「How to Beat Folie | Bravely Default 2 (Bravely Default II)」 with us!