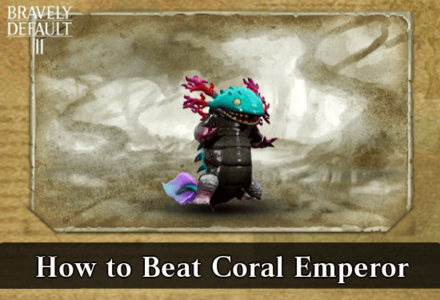 How to Beat Coral Emperor

Keep Your Magic Defense Buff Up!

Coral Emperor's Blizzaga will deal massive damage to your whole party. without these buffs, your party won't last until the Coral Emperor uses 4 braves to unleash a bunch of Blizzaga at your party.

As the Coral Emperor is weak to daggers, the Thief Job is perfect and its Godspeed Strike makes it way way better.

With a single use, the Thief can deal roughly around 5-6k damage depending on how strong the Thief is.

If you have managed to unlock and master the Shieldmaster Job, this fight can be a breeze with the proper equipment. Start with your allies in critical health and your Shieldmaster equipped with a Icefire Shield. This will negate all the damage from Coral Emperor's water attacks, allowing your remaining characters to focus on attacking him.

While not as efficient in terms of damage as the Godspeed Strike, Body Slam is still a decent option to use against the Coral Emperor.

It consumes 1 BP and being vulnerable against a boss that can burst you down is not suggested.

Characters dedicated to a mage build is better off going for a full support setup like a Bard/Pictomancer or even play as a 2nd White Mage.

In order for us to make the best articles possible, share your corrections, opinions, and thoughts about 「How to Beat Coral Emperor | Bravely Default 2 (Bravely Default II)」 with us!