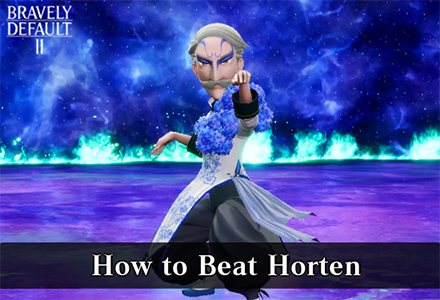 This is a guide to Horten, a Boss battle in Bravely Default 2 (Bravely Default II). Read on to know how to beat Horten, his strengths and weaknesses, and the best strategy against Horten.

How to Beat Horten

There isn't much gear to choose from so simply having the highest defense gear and strongest weapons will suffice.

If you were able to grind heavily, purchasing a Flame Talisman to weaken Horten's fire attacks can prove helpful.

Horten's damage is on the medium side. With banked turns, he is capable of unleashing combos on a single target. Make sure to keep on using Default and healing injured party members with white magic or items.

As with previous battles, leave the damage dealing to Sir Sloan and the battle will end pretty quickly.

Register as a member and get all the information you want. (It's free!)
Login
Opinions about an article or post go here.
Opinions about an article or post
We at Game8 thank you for your support.
In order for us to make the best articles possible, share your corrections, opinions, and thoughts about "How to Beat Horten" with us!
When reporting a problem, please be as specific as possible in providing details such as what conditions the problem occurred under and what kind of effects it had.