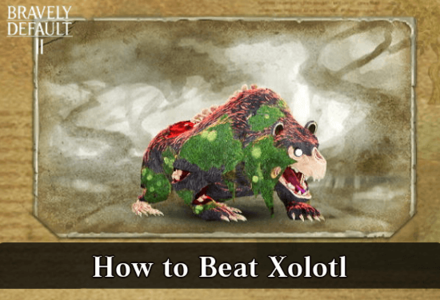 This is a guide to Xolotl, a Quest battle in Bravely Default 2 (Bravely Default II). Read on to know how to beat Xolotl, its strengths and weaknesses, and the best strategy against Xolotl.

How to Beat Xolotl

All of Xolotl's counters are physical attacks and learning Counter-Savvy lets you evade them. With this ability equipped, you'll only have to worry about his area attacks.

Cast Buffs on the First Phase

The first phase of the fight is Xolot's strongest. He uses Dance of Despair and Howl of Despair which hits all targets, the latter of which may also inflict Dread.

To combat this, apply Reraise and Don't Let 'Em Get to You and have a Shieldmaster/Bastion use Rampart every turn. 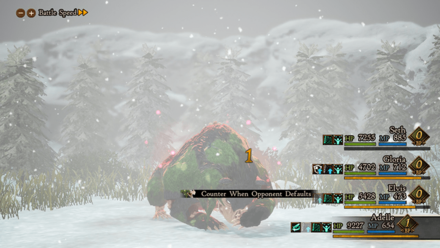 Xolotl counters Default by adding 1 BP to his own. When he has 3 BP, he will unleash a series of physical attacks that hits all targets and may KO your entire party.

If you have a Beastmaster in your party, you can capture some Kobolds and use them to steal his BP and add it to yours.

Having two Thieves with Godspeed Strike can easily whittle down the monster's HP during its first phase. If their MP gets low, have a White Mage/Spiritmaster Default and use Devotion to restore their MP.

During its second phase, the monster will start casting Doom and debuffs to your party. Continue attacking him with Godspeed Strike and he should go down in a few turns.

In order for us to make the best articles possible, share your corrections, opinions, and thoughts about 「How to Beat Xolotl | Bravely Default 2 (Bravely Default II)」 with us!