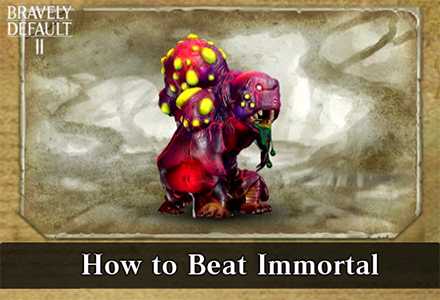 How to Beat Immortal

Immortal is weak to axe which is perfect for the Vanguard with a high proficiency in Axes. Spam Neo Cross Slash against Immortal and he'll fall in no time.

Contagion will slowly deplete your MP if Immortal keeps on using it. To counter Contagion, you can equip the Carbon Cap, use a Basunabringer, or not use magic attacks at all.

We highly suggest gearing properly but if no Carbon Cap is available in your inventory, having a level 12 Spiritmaster will allow you to permanently have 4 spirits including Basunabringer in your party. Just avoid having your Spiritmaster use Default or stock up some BP or their ability will disappear.

It Can Be Paralyzed

Immortal can be paralyzed. This can be further abused using the Phantom + Ranger combo so if you're having trouble with the Immortal, try locking it with paralysis to ensure a win.

A level 12 Phantom with the Shadowbind ability will 100% paralyze the enemy at the cost of a hefty amount of MP. Have another ally focus on restoring the Phantom's MP while the rest of the party attacks.

Restorative abilities will work on Immortal but its defenses will make the damage almost non-existent. Using the Red Mage's Healaga will allow you to dish out 3900 damage (7800 with Chain Spell) a turn.

Do consider using the Red Mage if proper countermeasures are taken against Immortal's Sickly Spittle.

In order for us to make the best articles possible, share your corrections, opinions, and thoughts about 「How to Beat Immortal | Bravely Default 2 (Bravely Default II)」 with us!