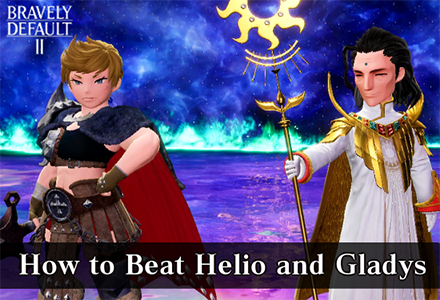 Burst Down Helio on the First Turn 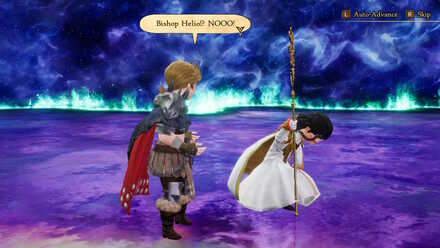 Helio is the duo party's healer similar to your first boss battle with Selene and Dag. He's an easier target but he'll often spam healing abilities and regenerative effects on himself and Gladys.

Eliminating him as quickly as possible is the best method of making this fight easier. To do so, the Red Mage's Chain Spell + Aeroga should be able to deal 16000 Damage with 4 braves (assuming each hit deals at least 2000 damage).

With support damage from Humanoid Slayer and Neo Cross Slash, it should be possible to eliminate him in a single turn. 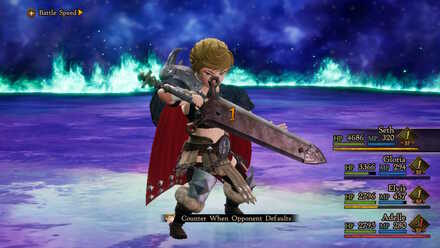 Gladys counters your default by building BP of her own, she can then use this to assume Solid Stance which will allow her to attack twice in a single turn. If she braves four times, this will be equal to 6 attacks against your party members.

To stop her from building up BP, use your idle turns to apply buffs or heal party members.

Rely on Revenge to build BP

Since defaulting isn't recommended, you'll have to rely on Revenge (or other BP boosting abilities you have learned) through out the fight.

Gladys' Solid Stance attacks are annoying and can one shot softer members of your team, so we recommend not letting her obtain BP.

Only Helio can deal AOE damage to the party, if you succeed in eliminating him on the first turn, your only problem should be healing single units.

A Red Mage's Heal or Healara should suffice for this so if you have a White Mage for this party, consider swapping it out for a Bard or other jobs that can support the team or weaken enemies.

Use Enrage on Gladys on BP 3 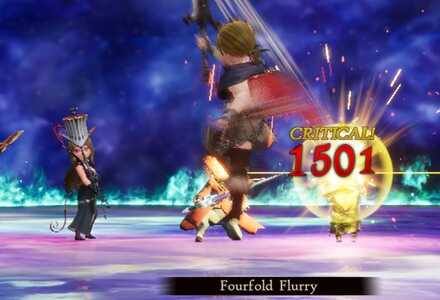 Once Gladys builds up 3 BPs, use the Vanguard's Enrage to draw all attacks to her. Her attacks will consists of normal attacks with a last Fourfold Flurry that deals 4 damage to a unit. If you are also running a Shieldmaster, use Bodyguard on your Vangaurd to further bulk up your defenses.

Only a tanky member can survive this assault so always remember to do this or you might suffer a team wipe.

Attack with your Red Mage

If your Red Mage has an open turn to attack, combine Disaster with Chain Spell to deal massive damage to Gladys.

Register as a member and get all the information you want. (It's free!)
Login
Opinions about an article or post go here.
Opinions about an article or post
We at Game8 thank you for your support.
In order for us to make the best articles possible, share your corrections, opinions, and thoughts about "How to Beat Helio and Gladys" with us!
When reporting a problem, please be as specific as possible in providing details such as what conditions the problem occurred under and what kind of effects it had.