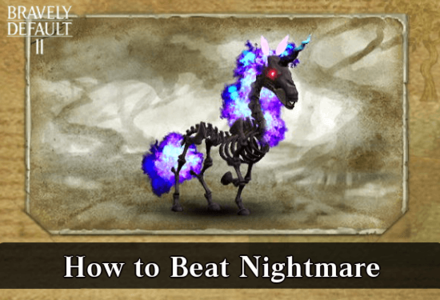 How to Beat Nightmare

For the fight against Nightmare, we highly suggest equipping a Star Pendantto reduce the nuisances you'll have to deal with during the fight. You'll also want to gear all your characters defensively as offensive damage is useless in this fight.

Healaga deals a fixed 3900 damage to Nightmare. With the Red Mage's Chain Spell, it can deal a whooping 7800 damage per use.

This is going to be your primary souce of damage during the fight. If you have 4 Red Mages in the party, it is even possible to one-shot the Nightmare at the start of the battle.

Nightmare will counter White Magics with Cavalry Charge. Not only does this damage your healer, it will also speed up the Nightmare. Avoid this if possible.

For the White Mage, his/her role will be healing the party using other healing magics. This can be Healara that targets the whole party (needs a mastered White Mage class) or using the Spiritmaster's Health Bringer and Regenearation.

Nightmare is the toughest boss battle in Bravely Default 2s demo. With the 5(7) hour time limit and a limited amount of level you can obtain, it is difficult to best the mighty undead. It is difficult however, it is not impossible. Below are the steps you should do to defeat the Nightmare. 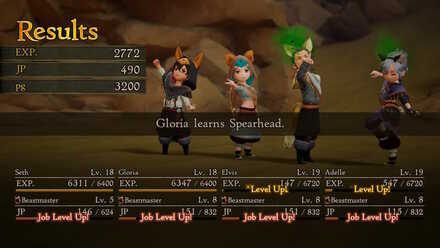 With a massive amount of stat difference, you should do your best to somehow narrow it down. Gaining some levels can allow you to survive a few hits from the beast.

The best way to level up is by exploring areas at night and using treats to increase the enemy count.

The Beastmaster class is perhaps, the most important part of the Nightmare strategy. It can summon captured enemies and use its ability once.

However, it has a revenge move where it will randomly summon a monster if the character takes damage and falls to a critical state and the monster won't be released into the wild (meaning you get to keep the monster you captured and summon it again!). 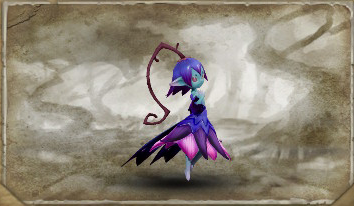 The Undines have the ability White Wind which allows them to heal the whole party based on their current health. However, the Undines that you capture has a fixed heal value of 911. This is vital to surviving the Nightmare's several AOE attacks. You'll want to capture several Undines (at least 30 but it is recommended to get more to ease the difficulty).

Even if you don't lose the monster by using the Beastmaster's revenge ability, you'll also want to summon it normally which will consume one captured Undine so make sure to poach a lot of them. Using the Soul Food will allow you to fight several Undines if you fight them on the world map with the food active.

Increase Your Freelancer's Level to at Least 8 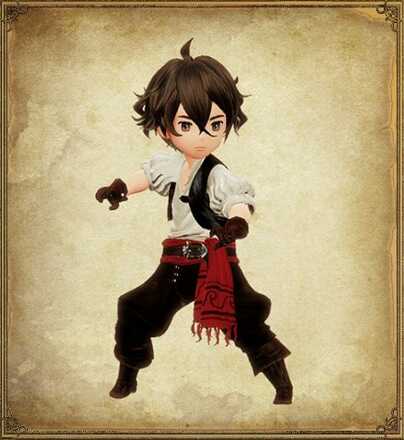 While this is completely optional, the Nightmare is an undead creature and it takes damage from healing effects. A Level 8 Freelancer can forage for Hi-Potions which can heal 1000 per use (it can be used against enemies).

If you don't want to do this, an alternative is buying 99 of each elemental item in the shop. This is a bit more tedious and inefficient so the Hi-Potion method is advised.

The Nightmare has an HP pool of 86,000 so you'll want to have 99 Hi-Potions as the Nightmare can also heal itself during the battle.

Further Increase the Freelancer's Level to 10

This is also optional and the Nightmare can be defeated without the Freelancer's level 10 ability Square One which can remove the speed buffs that the Nightmare obtains from its move Cavalry Charge.

Lessening its speed will prevent the Nightmare from overwhelming your party with high damaging attacks.

Get 2 Iron Bangles from the shop

A piece of Iron Bangle can increase your HP by 630.

Two of them can give you a good 1260 HP which allows you to survive several of the Nightmare's attacks and increase your critical HP threshold.

Increase Your Defense Without Sacrificing Speed

You'll want to have the highest amount of defense possible while not lowering your Speed. A Doublet for your armor and a Feather Hat or Headband would suffice as your armor piece.

For weapons, you don't want to equip any as any attack you do will have zero to minimal effects.

How to Beat Nightmare (Demo) 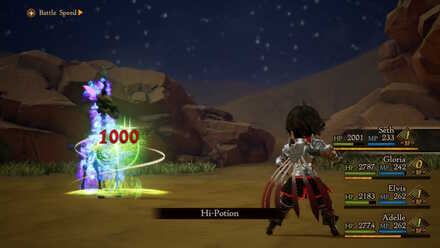 Perhaps, the only possible way to damage the Nightmare is to use offensive items. Nightmare possesses an absurd amount of stats which practically makes any damage you deal to it become non-existent.

A better alternative to damaging the Nightmare is by using restorative items. Potions are simply inefficient with its 250 heal so we'll want to use Hi-Potions.

As stated in the preparation above, you'll want to have 99 of them, and to get them, you should level your Freelancers to 8 and spam the Forage ability to get them.

Nightmare will focus on rotating between its two moves Cavalry Charge and Sandstorm Kick. Cavalry Charge deals damage to a single target (around 1500 damage) and increases the Nightmare's speed by 25%.

Sandstorm Kick is a KO move that can kill a full health party member that isn't defaulting. With at least one BP, it can chain both moves to a single target to eliminate it without counterplay.

This is not a phase that you'll want to stay in for long. Keep everyone's HP up via Undine's White Wind and spam Hi-Potions until its HP falls to 59,000.

Once Nightmare reaches 59,000 HP, it will start using Darkra and Poison Breath. This is perhaps, the Nightmare's easiest phase since its AOE attacks can be easily mitigated by the Beastmaster's revenge move using Undine.

Poison Breath's damage can be unpredictable since it ranges from 1300 to 1700. But against a defaulting foe, it will always deal around 900-1000. Use this to your advantage by keeping one character to the 1150 - 1300 HP threshold to trigger the Undine's White Wind. This will also work against a group-targeted Darkra so always have a defaulting character on this HP level to survive Nightmare's Brave attacks.

To control your character's HP level, try to sacrifice a character and let it die. Once fallen, use Brave once then use Phoenix Down on the fallen character + an Undine Summon. This will bring the character's HP to exactly 1211 which is the perfect range to default against the Nightmare's attacks.

The Nightmare starts to get desperate once its HP falls below 20,000. It will use fewer moves and will start focusing on using Default and using Darkra on itself to heal. A single Darkra can restore around 1000-1200 HP so once you reach this phase, it becomes a damage output test.

To slay the Nightmare, slowly damage it while building up your BP. Follow the strategy from Phase 2 and always have a character around 1150 - 1300 HP to survive the Nightmare's banked moves.

Once you manage to survive an onslaught, check the Nightmare's HP, if it's below 16,000, immediately Brave 4 times for each of your characters and throw all the Hi-Potions (or Earth Mallet if you have some) to emerge victoriously.

In order for us to make the best articles possible, share your corrections, opinions, and thoughts about 「How to Beat Nightmare | Bravely Default 2 (Bravely Default II)」 with us!