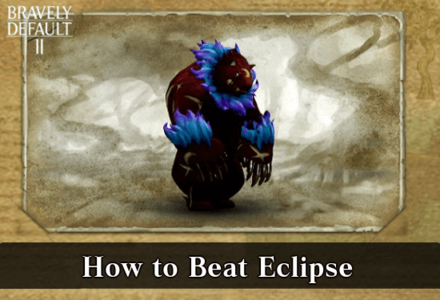 This is a guide to Eclipse, a Quest Boss battle in Bravely Default 2 (Bravely Default II). Read on to know how to beat Eclipse, its strengths and weaknesses, and the best strategy against Eclipse.

How to Beat Eclipse

Eclipse counters attacks with Armour-Piercing Paw. Use magic attacks to avoid this.

In particular, Eclipse is weak to light element so the Pictomancer's Chiaro move should make short work of Eclipse.

Thief's God Speed Strike is Worth It

Eclipse is weak to daggers which makes the Thief's Godspeed Strike move valuable once again.

Use Godspeed Strike despite its countermove to deal some massive damage.

Not a Difficult Boss Fight

Unlike the previous story bosses in Chapter 3, Eclipse doesn't really have any gimmicks that makes him a hard fight.

If you're struggling with it, consider gaining a few more levels to survive its attacks.

Register as a member and get all the information you want. (It's free!)
Login
Opinions about an article or post go here.
Opinions about an article or post
We at Game8 thank you for your support.
In order for us to make the best articles possible, share your corrections, opinions, and thoughts about "How to Beat Eclipse" with us!
When reporting a problem, please be as specific as possible in providing details such as what conditions the problem occurred under and what kind of effects it had.