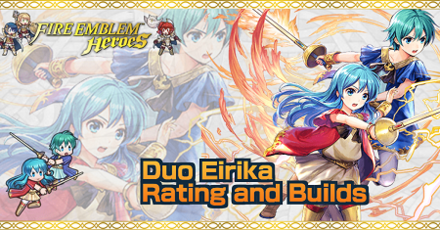 This is a ranking page for the hero Eirika - Twin Refulgence from the game Fire Emblem Heroes (FEH). Read on to learn the best IVs (Individual Values), best builds (Inherit Skill), weapon refinement, stats at Lv 40, and more for Duo Eirika.

The best IVs for Duo Eirika are +Spd and -Res. A higher Spd stat allows Duo Eirika to get a ton of follow-up attacks on her foes. This also helps her effectively leverage the Spd-based damage reduction she gets from her Duo Skill. Her Res is of less importance, so it is safe to take as a bane.

We recommend a +Spd IV when merging Duo Eirika to 10. This is for the same reasons as above! Maximize her Spd and she will be very bulky thanks to her Duo Skill.

You can also get a +Atk IV if you prefer, but +Spd is arguably better in most situations.

A budget setup for Duo Eirika! Her kit is already very complete, so you only need a movement-assist skill and a Sacred Seal of choice. Sturdy Stance 2 is just one of the many options you can take and it synergizes well with the rest of her kit!

A high budget build that takes advantage of the buffs provided by Atk/Spd Oath 3, even if you can't activate her Duo skill. If you would like to also support your allies, you can opt for another C skill. Or you can opt for Time's Pulse 3 to immediately have your Special ready.

Duo Eirika is a close physical attacker (range = 1). Therefore, when not accounting for the Weapon Triangle, the amount of damage she deals will be equivalent to her Atk minus the foe's Def stat.

The effect of Eirika's Duo Skill is shown below 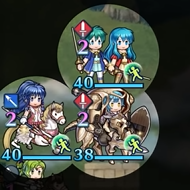 Her Duo Skill grants her and all allies within 3 spaces of her damage reduction based on how much faster (Spd) they are compared to the opponents they are up against! This is very powerful in the right lineups as whole teams can benefit if their Spd levels are set up well!

It can be used every 3 turns so time it nicely and it can win you some battles.

Blade of Renais grants an all-stat buff and leverages Def stat against enemies! 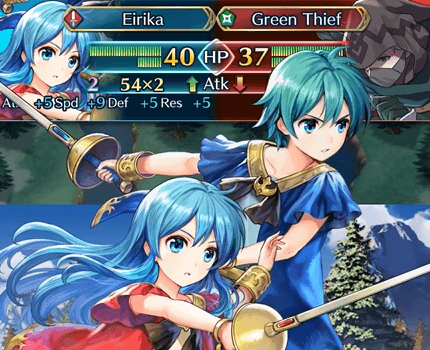 The buffs from Blade of Renais can be seen above.

Blade of Renais will grant +5 Atk/Spd/Def/Res to Duo Eirika if:

If you pay even minimal attention, it is almost impossible not to take advantage of this! Enjoy the stat buffs!

If one of the trigger conditions are met, it also allows Eirika to deal damage equal to 20% of foe's Def and restores the same amount of HP to Eirika. This makes her a powerful unit against foes with high Def levels.

The A skill Distant Foil allows Eirika to counterattack all physical attacks regardless of distance. This means Eirika can counterattack enemies that are even two tiles away.

Another perk of Distant Foil is that it gives a Atk/Def +5 to Eirika whenever physical enemies initiate combat.

Speed Buff for the Whole Team!

Joint Drive Spd grants +4 Spd to Eirika and Allies if they are within 2 spaces of each other during combat. It is a useful skill to have in most team compositions as it is both easy to utilize and everyone can benefit from it. In addition, it is a combat buff making it easy to stack with many other buffs like the buffs from Blade of Renais. 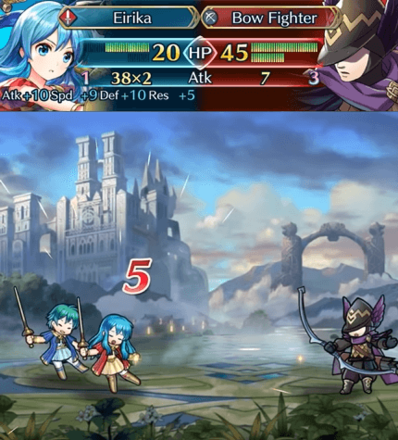 Eirika and Ephraim take only 5 damage instead of the calculated 7.

This synergizes quite nicely with the Duo Skill and allows your whole team to take less damage!

Eirika - Twin Refulgence Only Appears as a 5 Star Hero!

Duo Eirika as a Source Hero

How to Get Duo Eirika / Illustrations / Voice Actor / Quotes

How to Get Duo Eirika

Duo Eirika is a limited time Hero who can be pulled from a Special Heroes Summoning Event. They do not appear in regular summons.

Register as a member and get all the information you want. (It's free!)
Login
Opinions about an article or post go here.
Opinions about an article or post
We at Game8 thank you for your support.
In order for us to make the best articles possible, share your corrections, opinions, and thoughts about "Duo Eirika and Ephraim Builds and Best IVs" with us!
When reporting a problem, please be as specific as possible in providing details such as what conditions the problem occurred under and what kind of effects it had.